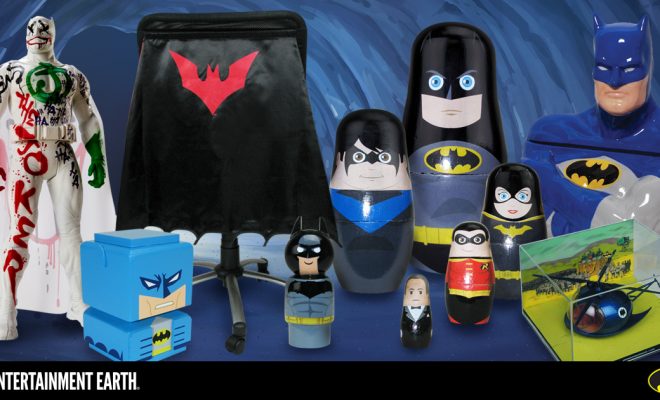 Jack Nicholson’s  THE JOKER™ famously asked about Michael Keaton’s BATMAN™, “Where does he get those wonderful toys?”

Bruce Wayne doesn’t have an Entertainment Earth account—as far as we know… But you can get from us all the wonderful BATMAN™ toys and collectibles you need to celebrate BATMAN™ Day 2016 on September 17.

DC Comics launched BATMAN™ Day in 2014 to mark the 75th anniversary of the DARK KNIGHT™. This year’s festivities, scheduled for comic book shops, toy stores, bookstores and libraries across the country, will again celebrate everything great about the CAPED CRUSADER™, in all his incarnations.

Looking for suggestions of what you should add to your collection in honor of BATMAN™ Day 2016? Here are eight of our favorite current and upcoming BATMAN™ toys and collectibles. 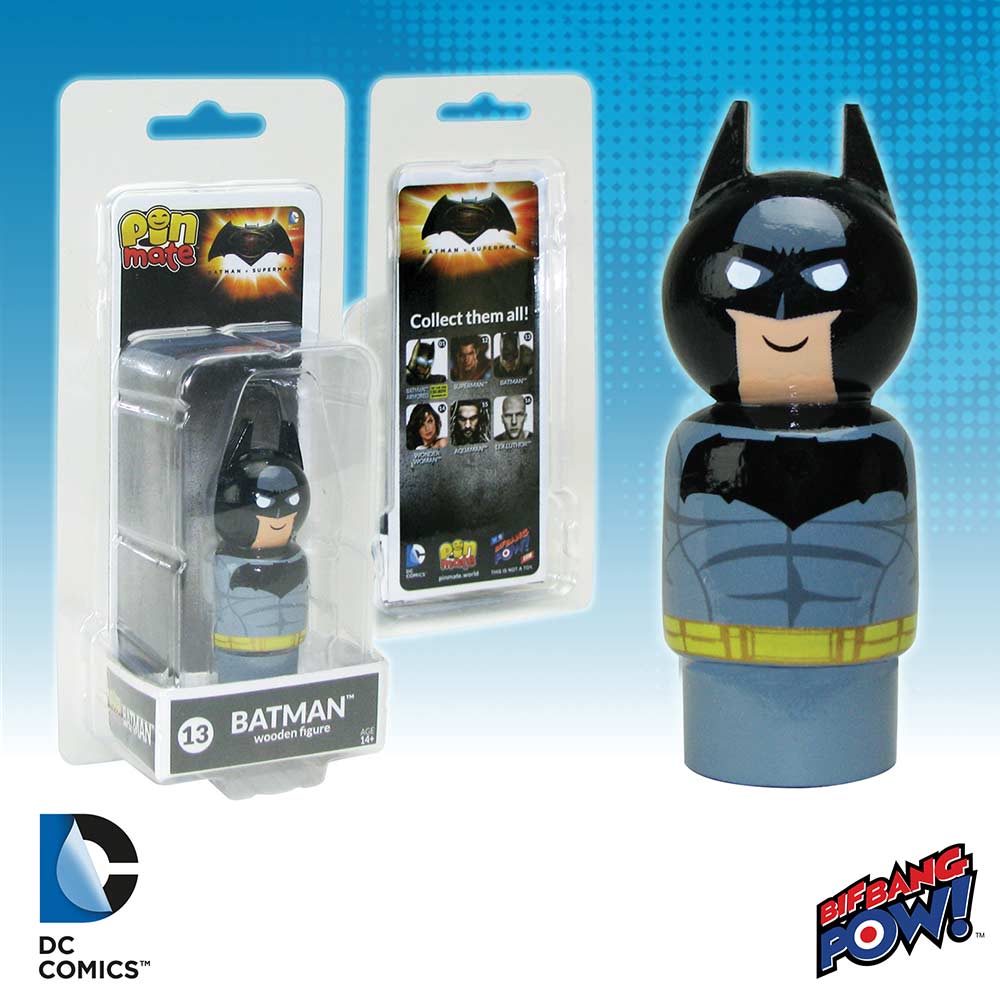 This two-inch tall wooden figure’s smile makes me think he’s about to unleash a whole utility belt’s worth of hurt on some superstitious and cowardly criminal who’s underestimated him! This retro-styled, 360-degree decorated wooden miniature is from Bif Bang Pow! BATMAN™ Pin Mate™ and is lucky number 13 (indicated on both the figure and on the box) in the series.

If you are looking to add something incredibly unique to your BATMAN™ collection, then our BATMAN™ Tiki Tiki Totem is for you! A squat 3.5-inch high and stack-able with other wooden Tiki Tiki Totems, this BATMAN™ evokes the “New Look” introduced by Neal Adams and other artists in the late ’60s and the ‘70s. Look at the focused aggression on that face: This BATMAN™ means business!

All together now: “Atomic batteries to power! Turbines to speed!” The coolest car on ’60s TV, the Batmobile starred in many young superhero fans’ daydreams, and is still one of Hollywood’s most famous onscreen vehicles. Cryptozoic’s “super deformed” tribute is every bit as crazy awesome as the car itself, capturing in polyresin all of its flame-throwing, tire-squealing excitement.

They say the family that patrols GOTHAM CITY™ in costume together stays together don’t they? Maybe not, but this clever and colorful set of matryoshka (or Russian nesting) dolls celebrates the Bat-family’s commitment and camaraderie. BATMAN™, Nightwing, Batgirl and Robin are all here, with faithful butler Alfred as their stable center (appropriately enough). The figures, hand-painted with limited decal details, range from six to two inches tall.

(If you’d rather “go rogue” with nesting dolls of BATMAN™ villains, we’ve got you covered!)

Remember that defaced statue of the Man of Steel in BATMAN™ v Superman? That was nothing compared to what THE JOKER™ has done to this San Diego Comic-Con exclusive, 19-inch tall BATMAN™ figure by Jakks Pacific’s Big Fig, limited to 3000 units. “Wild” really doesn’t begin to describe how the Clown Prince of Crime has “improved” this version of “Bats.” He’s even vandalized the packaging! This the perfect piece for the collector who understands how much BATMAN™ is defined by his bad guys.

The animated BATMAN™ Beyond series (1999-2001) broke new ground envisioning a hero for a near-future GOTHAM CITY™ gone cyberpunk. Today’s science hasn’t developed Terry McGinnis’ high-tech Batsuit yet, but we’re pleased to offer our exclusive, limited edition chair cape until it does! Emblazoned with the show’s stylized red bat and restricted to 1200 individually numbered pieces, this 24-by-30-inch cape instantly turns almost any chair into the seat of operations for a daring campaign against crime—or at least against office boredom.

(We’ve also got chair capes for multiple versions of BATMAN™ style, as well as for Batgirl, THE JOKER™ and Harley Quinn!)

Of course, everyone knows about the Batmobile. Only the BATMAN™ connoisseur knows about the Flying Batcave! The Dynamic Duo’s Silver Age sky-soaring HQ boasted advanced surveillance and camouflage capabilities, a powerful electromagnet, even a fully stocked galley. Seen only in Detective Comics #186 (August 1952) and #317 (July 1963), the Flying Batcave seems unlikely to show up in Ben Affleck’s solo BATMAN™ movie, but you can get your own die-cast replica, with 12-page informational and illustrated magazine, from Eaglemoss.

Aunt Harriet warned you about snacking between meals, didn’t she, old chum? You’ll think twice about sneaking a cookie and spoiling your appetite when BATMAN™ (whether in black suit or blue) is guarding the goods.

What are you doing to celebrate BATMAN™ Day 2016? Leave a comment below and let us know!