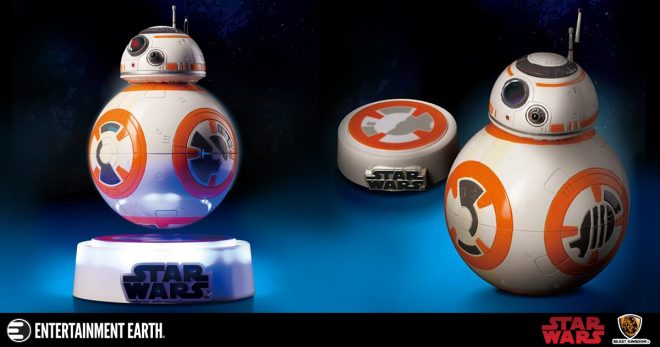 Droids are a staple of the Star Wars franchise. We’re accustomed to R2-D2 and C-3PO being those droids that get all of our attention but with the release of Star Wars: The Force Awakens, we were introduced to a new and more adorable kind of droid. BB-8 not only served as a new style of astromech droid but he also proved to be a great companion much like R2 before him. He was Poe Dameron’s friend and co-pilot and he stole our hearts with every new scene. Bring BB-8 home like never before with a new Floating statue!

You’ve seen the app-controlled BB-8 already, but now it’s time to get a floating BB-8! Designed to look exactly like he does in the movie, this BB-8 statue is beautifully lit with LED lights and floats just above the provided platform display. The power switch is hidden to give it a much more natural and spectacular feel. The pain and design pop when lit up and the floating feature provides a one of a kind feel to this collectible.

BB-8’s aging friend R2-D2 used to be able to hover in his youthful days, and now BB-8 can give his rolling ways a rest and float casually above the display. Get yours today and keep BB-8 with you wherever you may travel. You never know when you might need him!

Collectibles Fun Collectibles
Related ItemsBB-8Beast KingdomPreviews ExclusiveStar WarsStar Wars: The Force Awakens
← Previous Story 6 Spooky Favorites for the Halloween Season
Next Story → Which Side of the Cybertronian War Are You On?