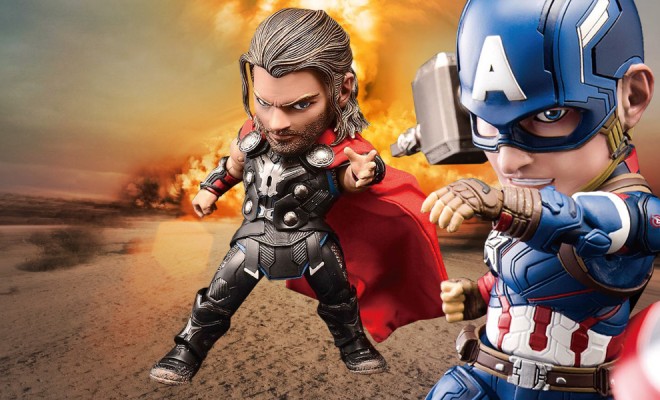 New from Beast Kingdom Toys come Egg Attack action figures from Avengers: Age of Ultron! These miniaturized versions of your favorite Avengers are intricately sculpted in full detail, and feature metallic paintwork to bring out shine of their armor and weaponry.

Clad in a star-spangled red, white and blue, Captain America is the embodiment of patriotism. The Captain America Egg Attack Action Figure has over 30 points of articulation, and 2 interchangeable faces with separate rolling eyeballs – letting collectors display the figure to their own preference! The figure is specially crafted based on the image of Captain America, featuring a painted helmet and suit and a magnetic metal red and blue shield, which can be attached to the forearms and back with a magnetic-embedded design.

The Mighty Thor Odinson, heir to the King of the Gods, is descended to the human world of Midgard! The Thor Egg Attack Action Figure has over 22 points of articulations with separate rolling eyeballs. Moreover, the figure is specially crafted based on the image of Thor, featuring a highly detailed costume, and an LED light-up Mjolnir. The figure comes with 3 interchangeable hands, and 2 pairs of interchangeable arms, letting collectors display the figure to their own preference.

Don’t miss the action! Pre-order the Avengers: Age of Ultron Egg Attack action figures today. Each figure is available for pre-order with free shipping at Entertainment Earth and expected to arrive in May 2016.