Marvel dominated at the box office again with their latest summer smash. If you loved the movie as much as I did (and, let’s be real, you totally did), then you need to check out these Captain America: Civil War Captain America and Iron Man Egg Attack statues!

Captain America is ready to defend what he believes in until the very end. The highly-anticipated EA-023 Captain America statue is expertly sculpted and individually hand-painted. Also prominent is the battle weather effects applied to both his suit and shield. This statue is presented on a diorama base and measures approximately 8-inches tall.

There are two sides to every conflict, and Tony is here to fight for his. The EA-024 Iron Man Statue is specially crafted based on Iron Man’s new armor in Marvel’s Captain America: Civil War. Every intricate detail as seen in the movie is captured with expert sculpting and individually hand-painted to show the meticulously sculpted sleek armor with battle damage effects. The collectible also features 10 LED light-up points throughout the body. This statue is presented on a diorama base and measures approximately 8-inches tall.

You can purchase these statues individually, or you can treat yourself and buy the 2-pack! As an added bonus, the 2-pack comes complete with an interchangeable battle damaged head sculpt of Captain America!

These collectibles will be available January 2017. Place your pre-orders with Entertainment Earth now and receive free U.S. shipping! 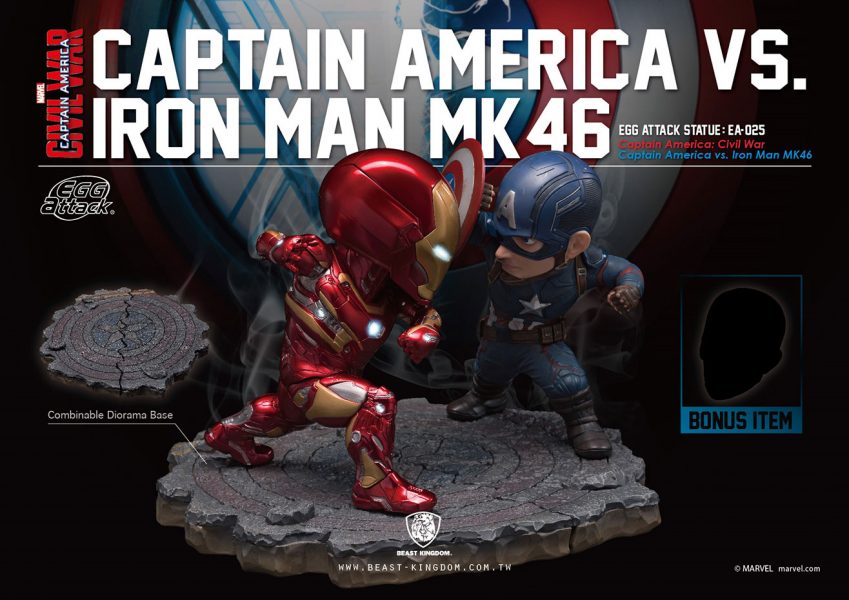