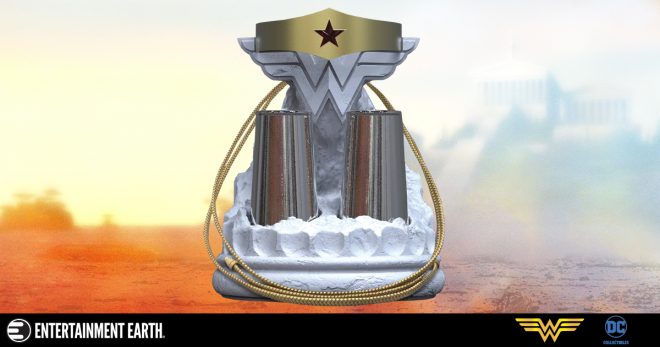 Diana Prince has graced the pages of comic books since 1941. Whether it’s as Wonder Woman, Diana Prince, Diana, or Princess of Themyscira – she is and always has been a feminist icon. William and Elizabeth Marston did this intentionally, taking inspiration from pioneers of the feminist movement, and have specifically credited women like Margaret Sanger as one of their muses.

After being given life by the Goddess Athena, and using her strength gifted her from the Greek Gods themselves, Diana goes on to become her own hero away from her people. Eventually she becomes a founding member of the Justice League, teaming up with the likes of Batman and Superman to save Earth from foes both domestic and galactic.

And who doesn’t want to try to emulate that kind of character? Now you can with this Wonder Woman Tiara, Bracelet, and Lasso Prop Replica set!

Complete with tiara, gauntlets, and the one and only lasso of truth, this prop replica is beautifully displayed on the fragments of a Greek pillar, and is a 1:1 scale!

Pre-order this prop replica now and it will arrive at Entertainment Earth in December of this year!