The Best ‘Guardians of the Galaxy’ Cosplay

Guardians of the Galaxy blasted apart the box office with a $94.3 million opening last weekend. The Marvel hit continued to bring in an audience during the week with record breaking weekday numbers. Fans are hooked on this movie and some of those fans have gone above and beyond to show their affections. Cosplayers have broken out their hot glue guns and fabric stashes to recreate the beloved characters from the box office hit. As the fall convention season begins, look for these Guardians of the Galaxy cosplayers and more! 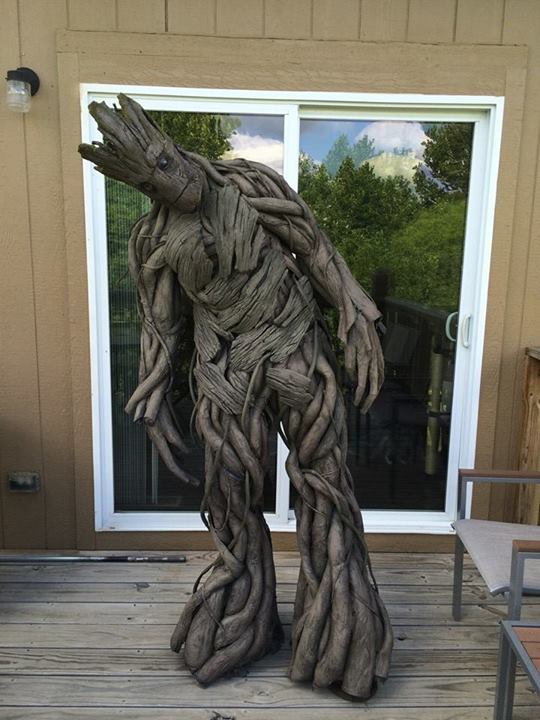 Calen Hoffman created this spot-on Groot costume in six weeks for less than $100! Materials included pipe insulation foam, hot glue, EVA foam, kleenex, scenery foliage from model trains, and a whole lot of dremel work. From the dremel shaping to the paint job, Hoffman perfected Groot’s bark and moss aesthetic. He even built in stilts to get the right height.

Teaming up as the goofy Peter Quill and an anthropomorphized, female Rocket Raccoon are Americo Galli and Alexandria the Geek. Galli could almost be mistaken for Chris Pratt with the detailed Star Lord mask and blasters. He even has the orange headphones. Alexandria designed a Rocket Raccoon to suit herself, complete with fluffy raccoon tale and giant gun.

If you thought Rocket Raccoon cosplay ended at humanized versions of the cyborg-raccoon, you haven’t seen Cyber Bunny Cosplay. With a full body suit and a removable head, the Italian cosplayer brings Rocket Raccoon to life. Even the facial designs are as snarky as Rocket’s!

Elendriel has been costuming since 2006 and loves all things superhero. Elendriel brought a stellar rendition of Ronan the Accuser to Dragon Con. This fantastic representation of Ronan was extraordinarily well received (and completely home made!).

The Guardians of the Galaxy

We only wish we knew everyone featured in this fantastic groups of Guardians! This group includes the film’s five member ragtag team alongside some comics favorites! They even have Cosmo the Space Dog!

Are you working on your own Guardian costume? Have you seen an amazing Guardians cosplayer we missed here? Share in the comments!