‘Tis the season for gift shopping, which means three things: big crowds, long lines, and great deals! This year, skip the big crowds and long lines – go straight for the deals and shop at entertainmentearth.com.

This week, Entertainment Earth has a Bobble BOGO: Buy 3, Get 1 Free offer – which can help you knock a few people off your list! And Bif Bang Pow! has an awesome selection of Star Trek bobble heads and ships for the Trekkie(s) in your life.

Here are 8 top Star Trek bobbles for the holidays:

8) Star Trek: The Next Generation Picard Bobble Head
Captain Jean-Luc Picard, commanding officer of the U.S.S. Enterprise, looks spiffy in his dark-red Starfleet uniform with black pants and boots. Made of resin, he stands about 7-inches tall including The Next Generation-themed base. Sculpted by 3D Systems a.k.a. Gentle Giant, the head features remarkable likeness of actor Patrick Stewart.

7) Star Trek: Voyager Seven of Nine Bobble Head – Convention Exclusive
Can you sense nearby Borg activity? She can! Measuring 7-inches tall, this resin bobble head celebrates Star Trek: Voyager’s Seven of Nine in her famed red dress from Episode #164, “Human Error,” as she stands on top a delta-logo base that includes her name.

6) Star Trek: The Next Generation Guinan – Build a 10 Forward Bobble Head
Guinan awaits you in this 7-inch scale resin bobble head that has her dressed in rich purple, standing behind a bar replica from the Enterprise‘s Ten Forward lounge! Guinan connects with the Q Bobble Head to form a mini Ten Forward bar scene, too. Q bobble sold separately. 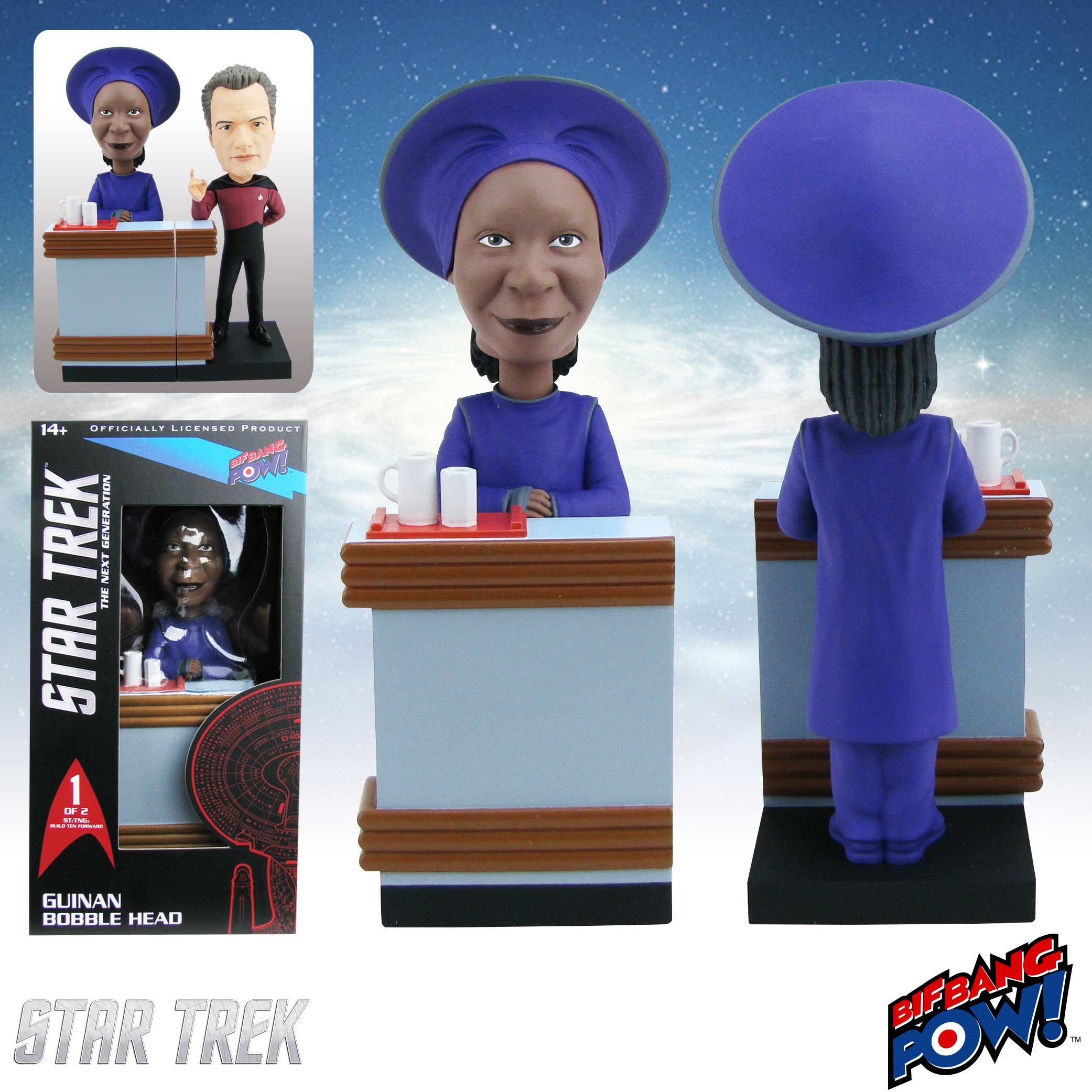 4) Star Trek: The Original Series The Naked Time Sulu Bobble Head
Oh My! Featuring Sulu (as portrayed in Star Trek: The Original Series episode “The Naked Time”), this unique all-resin bobble is a must have for any classic Trek collector! Measuring 7-inches tall, the muscular lieutenant is showcased with his infamous sword while standing on top a delta-logo base that includes his name. 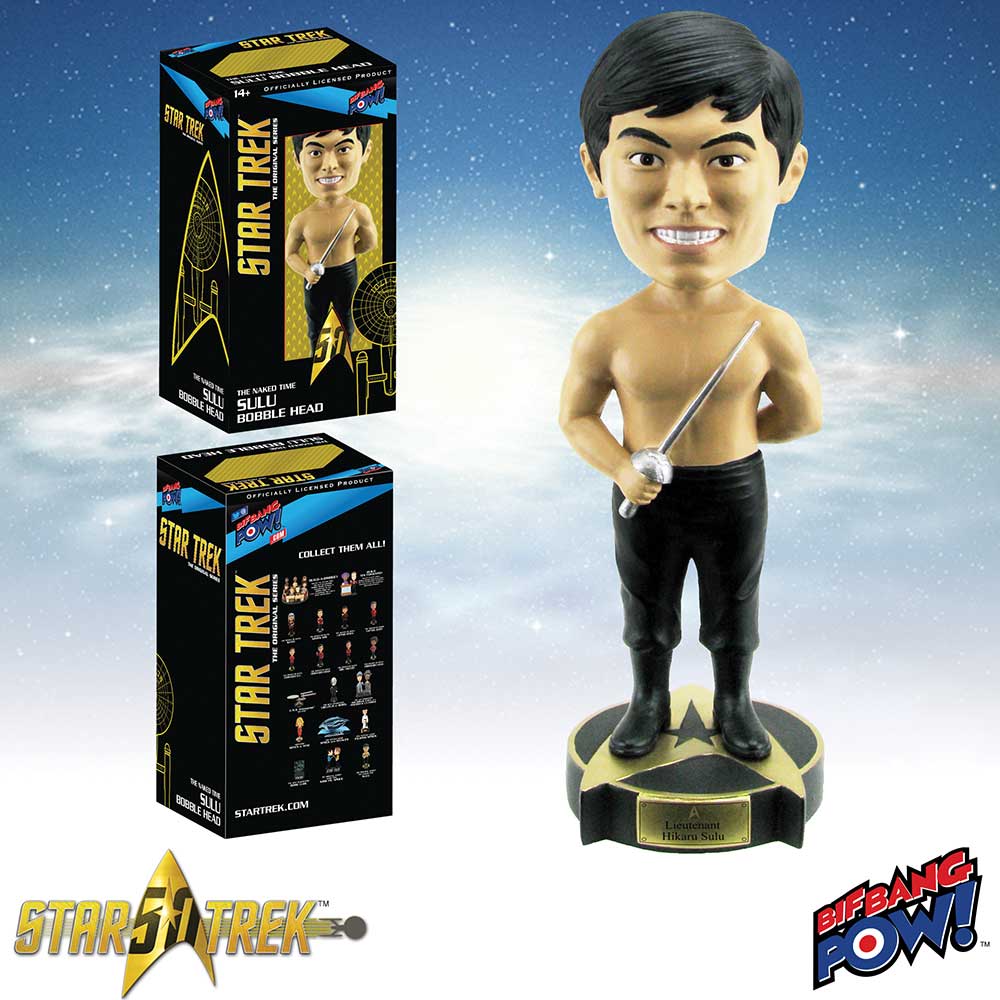 3) Star Trek Captains Monitor Mate Bobble Heads Set of 5 – Convention Exclusive
Now collectors can proudly display all five of Starfleets most prominent commanding officers as 4-inch scale miniature resin bobble heads. Each figure showcases one of the five captains with their ship specific captain’s chair that can attach to a flat surface with a non-damaging adhesive pad on the base.

1) Star Trek: The Original Series Amok Time Kirk vs. Spock Bobble Heads – Convention Exclusive
On a Star Trek-themed base measuring 7-inches tall x 4 3/4-inches wide, with lirpa weapons in hand, Kirk and Spock battle and bobble at the head while you look on in astonishment. Taken from the “Amok Time” episode, the extraordinary resin piece also plays the music from the fight scene with the push of a button.

Plus for a limited-time only, receive FREE U.S. shipping on in-stock orders of $59 or more. Save even more (while offer lasts) and use coupon code “EARLYBIRD” during check out to save an additional $20 on any in-stock order of $100 or more.

Collectibles Fun Collectibles
Related ItemsBif Bang Pow!Bobble HeadBobble Headsbogobuy one get oneholiday giftholiday shoppingSaleStar Trek
← Previous Story Get the Most Supreme Dr. Strange Collectibles before the Movie Comes Out!
Next Story → Travel to the Upside Down with These Stranger Things Pop! Vinyls