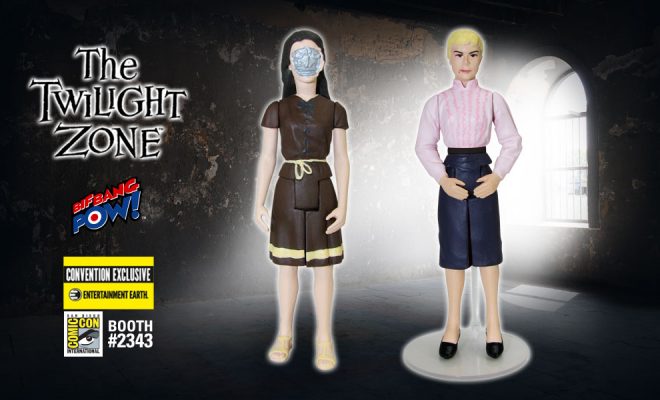 Designed similar to the action figures released in the ’70s, each retro-styled color figure features 5 points of articulation (neck, shoulders, and hips). Each convention exclusive action figure is a limited edition of only 672 pieces – with each piece in the run individually numbered on a holographic sticker.

The Twilight Zone Alicia 3 3/4-Inch Action Figure In Color – Convention Exclusive celebrates the female robot companion in the heart-wrenching episode “The Lonely.” This rare, limited figure showcases Alicia in her worst moment, after being shot leaving her mechanical facial wiring exposed. Is she just machine or something more? Only you can decide.

The Twilight Zone Marsha White 3 3/4-Inch Action Figure In Color – Convention Exclusive pays tribute to the well-known department store episode “The After Hours” starring Anne Francis. Complete with a stand accessory, you will have to look closely to see if this figure celebrates the female shopper, mannequin… or both!

These are limited edition Entertainment Earth Convention Exclusive figures and won’t last long! Ages 14 and up.

Be sure to check out the entire Bif Bang Pow! series 4 color 3 3/4-inch action figures inspired by The Twilight Zone, including Don Carter (“Nick of Time”), Jerry and Willie (“The Dummy”), and Hansen (“A Quality of Mercy) – all previously announced.

Available for the first time on July 20, 2016 at the Entertainment Earth booth #2343 at San Diego Comic-Con, fans attending the show will have the earliest opportunity to score these individually numbered and limited edition exclusives!

(*NOTE: These items will first be sold during San Diego Comic-Con 2016 at Entertainment Earth Booth #2343. If supplies remain after the show, pre-orders will be filled and shipped to you then – in August 2016.)