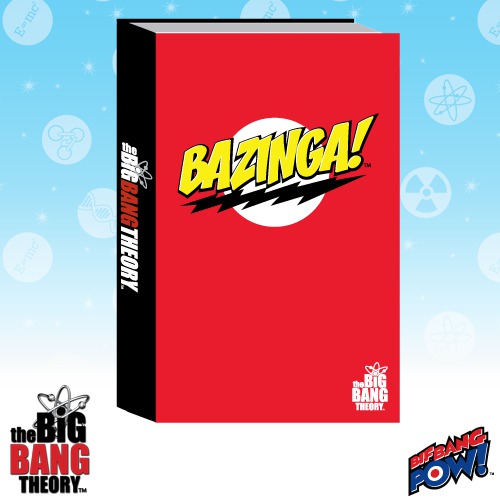 It’s BAZINGA!™ time again, folks, so grab your The Big Bang Theory BAZINGA!™ Traditional Journal and start writing! It’s the perfect place to immortalize all those clever quips and intelligent ideas nobody else cares to hear. Keep them just between you and your true peers and pals on The Big Bang Theory! The bright red, white, and black book features a traditional TBBT look and feel, complete with BAZINGA!™ on the cover and the show’s logo on all sides. It contains 320 lined white pages and measures about 8-inches tall x 5-inches wide.

In The Big Bang Theory, Leonard and Sheldon are brilliant physicists – geniuses in the laboratory, but socially challenged in the real world. Enter beautiful, street-smart neighbor, Penny who aims to teach them a thing or two about life. Despite their on-again, off-again relationship in the past, Leonard found true love with fiancé, Penny. Even Sheldon has found a female companion – entering into a “Relationship Agreement” with neurobiologist Amy Farrah Fowler. In their free time, Leonard and Sheldon continue to enjoy frequent trips to the comic book store and fantasy role-playing games with their ever-expanding universe of friends, including fellow scientists Raj and Howard, and Howard’s adorable microbiologist wife, Bernadette.