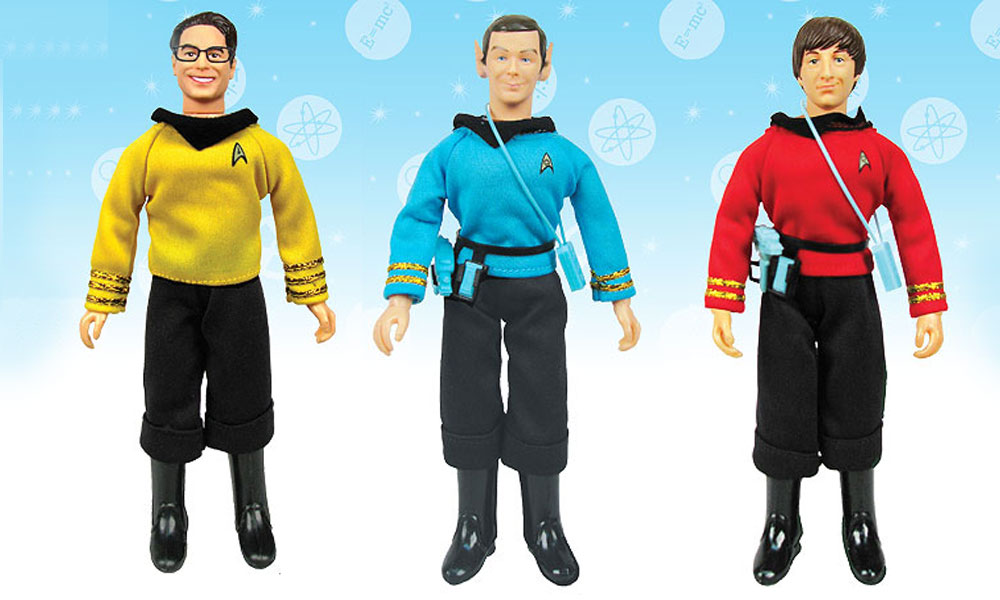 Big Bang Theory fans know that the boy geniuses are big Star Trek fans, and many are aware that an old Mego Spock figure made an appearance in the show. But did you know that the first Mego figure owned by Bif Bang Pow!’s founder, Jason Lenzi, was from Star Trek? These retro style figures are a throwback to both TOS and the original Star Trek Mego figures, and the first time Bif Bang Pow! has done a license crossover like this in a single figure or set of figures.

These amazing figures are done in the retro Mego style and feature multiple points of articulation. These figures come with accessories, including a belt, phaser, communicator, and tricorder based on Star Trek TOS. Check out the whole fantastic Big Bang Theory Star Trek Action Figure line from Bif Bang Pow! today! These action figures are scheduled to arrive in October 2014. Check out the whole Big Bang Theory action figure line from Big Bang Pow!.

Can you imagine that socially challenged, hyper-intelligent physicist Leonard Hofstadter as Captain James T. Kirk? Well, here he is, standing about 8 inches tall in an episode-specific inspired gold Command uniform!

Who better to portray Mr. Spock than the highly intelligent and always logical(?) BAZINGA!™ boy himself, that fan-favorite fussy physicist, Sheldon Cooper?

You know that Operations guy that’s always getting killed in the series? Well, maybe he doesn’t always get killed… just most of the time! Anyway, astrophysicist Rajesh “Raj” Koothrappali is ready to assume the role in his episode specific red Operations uniform.

When it comes to loquacious geniuses, Howard Wolowitz is your man – as Montgomery “Scotty” Scott! Howard joins Raj in Operations red to portray the brilliant Scottish engineer.

Where would the boys be without Penny? The beautiful waitress and aspiring actress joins the crew of the U.S.S. Enterprise in this figure, and no one is more deserving! Penny, alongside Howard and Raj, also wears Operations red. Hopefully she won’t get killed based on the color of her dress!

Spock may be the king of Sciences, but the Enterprise can certainly utilize the talents of neuroscientist Dr. Amy Farrah Fowler! Although Doctor McCoy might not be so thrilled. Amy wears the blue Sciences uniform. Amy Fowler is a limited edition of just 602 pieces that comes individually carded.

Microbiologist Bernadette Maryann Rostenkowski-Wolowitz would be a valuable addition to your crew. Let’s just hope she doesn’t get the entire U.S.S. Enterprise locked down in quarantine! Alongside Sheldon and Amy, Bernadette wears a blue Sciences uniform.