The Bold and the Brave Become Cuddly Plush 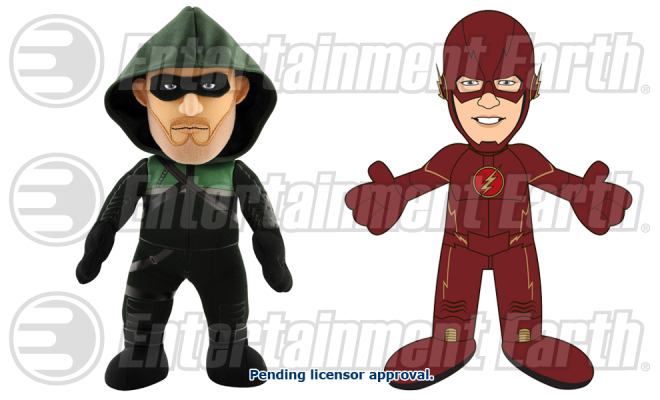 Do you love The CW’s Arrow and The Flash? Do you love curling up on the couch every week to watch the new episodes? If your answers to those questions are yes, then you’re in for a treat! From Bleacher Creatures come brand new Arrow 10-Inch Plush and The Flash 10-Inch Plush! They join other Marvel and DC friends as plush figures.

These two DC heroes are brave, bold, and everything in between – including cuddly!

The Arrow plush features Oliver Queen in his Green Arrow costume, hood and all. He has that familiar facial hair depicted and while he might normally be angsty and dark, he makes a surprisingly great cuddle buddy. Plush bow and arrows not included, unfortunately.

In addition to being the Fastest Man Alive, Barry Allen is also the snuggliest. As a 10-inch plush figure, he wears his dark red costume adorned with yellow lightning, showing that even burrowing down for a movie won’t stop him from saving the day.

The Green Arrow and Flash have crossed paths before so it only makes sense that you get both in case they do again! There’s no need to choose between them because superheroes work, and cuddle, together.

Oliver and Barry are must-haves for any DC fan and currently available for pre-order at Entertainment Earth, where they are expected to arrive in August 2015.