Your Childhood Dreams Become a Reality with This 1:4 Scale Statue

Back on November 20, 1998, the first piece of the International Space Station (ISS) was launched into space. Since then other components have been added until the last piece was put in place in 2011. Now the ISS is the largest human-created body orbiting the earth. Maintaining a low orbit altitude of between 205 and 270 miles, it serves as a giant laboratory used by explorers and scientists from many countries to conduct experiments in such fields as biology, astronomy, physics, and more.

This beautiful statue realistically displays how an astronaut would look working in space outside the space station in zero gravity. Exquisite detail work has gone into the figure’s perfectly tailored EMU (Extravehicular Mobility Unit) spacesuit and LED light-up helmet, as well as the accompanying SSRMS robotic arm, Quest Joint Airlock diorama base, and two movable connecting wires. Two AA batteries are required. In addition, this statue indicates the many countries that use the ISS with 20 interchangeable flags and nine mission patches.

You can be assured of the artistic accuracy of this piece because Blitzway has been approved by both NASA and the Canadian Space Agency for the production of this statue. And the really good news is that this is only the first reproduction in The Real series by Blitzway. More will come, and Entertainment Earth will be ready!

Relive the daring and courage of the explorers of space by ordering the Real Astronaut International Space Station 1:4 Real Scale Statue. Pre-order it now and guarantee delivery in June 2019. 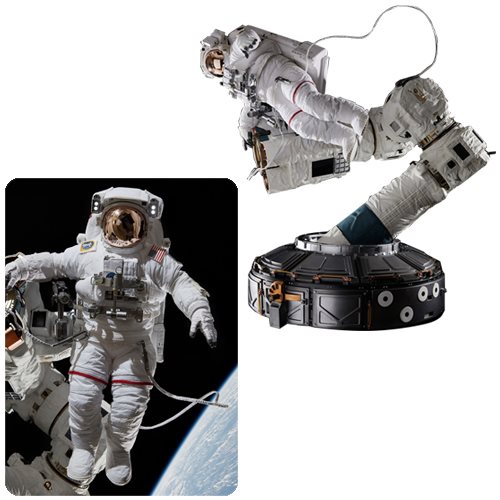