Go ahead. Hit him as hard as you can. Tyler Durden is everyone’s inner child, or inner anarchist, depending on how you look at it. With his fresh nihilist perspective on life, Tyler brought an entire generation to the realization that you are not your job, your bank account, or your khakis. Fight Club was a stirring and revolutionary novel that had one of the most tone-perfect movie adaptations ever made, creating a cult-classic that is a pure rush to watch, even today.

Now you can take part of Fight Club home with these two Tyler Durden 1:6 scale movie character action figures. The Fight Club Tyler Durden Red Jacket Version Action Figure is a perfect sculpt of actor Brad Pitt in his portrayal of Tyler at the beginning of the movie. He is dressed in accurately tailored clothes with a picture perfect face sculpt by K.A. Kim. With interchangeable hands and multiple tools of destruction (or liberation?), action figures don’t come more cool than this.

But later in the movie, as Ed Norton’s narrator character gets torn down to rock bottom, Tyler becomes a more and more powerful presence. Even as he spouts rhetoric against self-improvement, Tyler becomes more physically perfect with more outlandish clothes and style. To capture the power and prowess of third-act Tyler Durden, you can pick up the Fight Club Tyler Durden Fur Coat Version Action Figure. With the unmistakable space-monkey buzz cut and bombastic gear, this figure shows what happens when your inner demons get on the outside for a little too long.

But if you’re ready for a steal, get the Fight Club Tyler Durden Action Figure Special 2-Pack! This comes with both characters and all the accessories and interchangeable parts, along with an exclusive coffee cup bathrobe, for when Tyler is cutting loose at the Paper Street bungalow. Both figures measure about 12-inches tall but include life-sized attitude. Pre-order yours with free shipping today at Entertainment Earth! 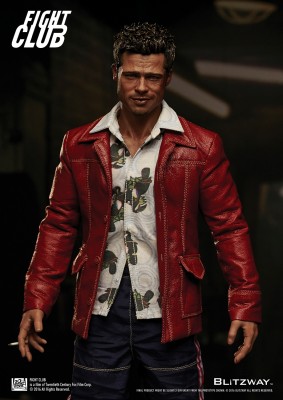