These Bluth Family Pop! Vinyls Are Definitely Not a Huge Mistake

You definitely won’t be making a huge mistake with these Arrested Development Pop! Vinyl Figures from Funko.

A handful of your favorite Bluth family members (and Tobias!) have received the Pop! Vinyl treatment and will be great additions to your collection. Show them off to all the other Arrested Development fans!

Our protagonist of the show, and straight man, Michael Bluth gets not one, but two figures. With arms folded and wearing his familiar suit, the first figure of Michael shows him in his natural state: exasperated with his family. But he’s the one keeping them together. If you want something a little different, check out the figure of Michael in his banana stand uniform! He’s even carrying a frozen banana.

George Michael Bluth is Michael’s son and ever straight-laced and awkward, a little like his father. He manages the frozen banana stand, which is how you see him in this figure, carrying the same frozen banana as his father.

Do you dream of joining the Magicians’ Alliance? Well with the Gob Bluth Pop! Vinyl, you can get one step closer. As the oldest son in the Bluth family, Gob is dressed here in his magician’s outfit, carrying three red playing cards.

Buster Bluth is the youngest son of the Bluth family and he also has two figures! With a hook for his left hand and carrying a grape juice box in his other hand, Buster is definitely an interesting character. But he’ll definitely be a big hit in your collection. For the even stranger collection, get Buster in his bizarre army outfit from the 4th episode of the 2nd season, titled “Good Grief”.

George Bluth, Sr. is the patriarch of the family and starts out the show in prison for “creative accounting” at the Bluth Company. Wearing his orange prison jumpsuit, he’s carrying a bitten into ice cream sandwich.

Tobias Fünke may not be a Bluth by blood but he’s definitely an integral part of the show. He’s married to Lindsay Bluth and father of Maeby. This figure comes randomly packaged, either with the original figure (wearing nothing but his cut-off denim shorts and flip-flops) or a variant (same design, but completely blue from when he tried to join the Blue Man Group). Both are great and it’ll be a surprise to see which one you end up with!

All of these Arrested Development Pop! Vinyl Figures are currently available at Entertainment Earth, where in-stock orders of $79 or more receive free shipping. 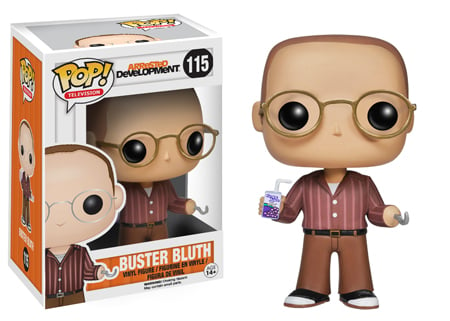