A Brief History of Boba Fett Toys and Collectibles

On November 17, 1978, the Star Wars Holiday Special aired for the first and only time in the U.S.

Targeting this mammothly misguided “spectacular” for ridicule is easier than bullseyeing womp rats in Beggar’s Canyon. But Star Wars fans do owe the show a debt of thanks for bringing us the first appearance of Boba Fett.

In an animated, honest-to-goodness Star Wars story smuggled into the all the loopy Life Day shenanigans, the enigmatic man in the awesome armor (even if it wasn’t yet sporting its familiar color scheme) teams up with our band of rebel heroes. Ultimately, he is revealed as the “right-hand man” of Darth Vader, who praises him, “I see why they call you the best bounty hunter in the galaxy.”

Boba Fett’s introduction electrified Star Wars fans. His cartoon debut probably helps explain how a character who got only 6-1/2 minutes of screen time and 27 words of dialogue in The Empire Strikes Back became such a favorite: The pump had been primed 2-1/2 years earlier!

Today, Boba Fett commands as loyal and as large a following as any in Star Wars fandom through Boba Fett collectibles and Boba Fett toys. He’s also inspired an impressive amount of merchandise, enough to fill Slave I’s cargo hold several times over.

In honor of Boba Fett’s “birthday,” here’s a look at some memorable products that celebrate the most feared and fantastic mercenary in the Galaxy Far, Far Away.

Kenner Products’ 3 3/4-inch Star Wars action figures were the toys to have in 1978. To capitalize on and grow the line’s success, Kenner offered a Boba Fett figure to customers who mailed in proofs of purchase from 4 other figures.

I have vivid memories of this campaign – not because I was expecting a Boba Fett in the mail, but my best friend, Hal, was. He said the new character’s name was “Bubble Fat” (hey, we were six-year-olds), but the silly name didn’t matter because this toy was going to be cool. Hal was especially looking forward to the action figure’s advertised “Rocket Firing Back Pack.”

You may already know that Hal, and a lot of other Boba Fett fans, were disappointed. As the reference book, Star Wars Year By Year explains, the figure that Kenner shipped the next summer had “a non-firing rocket… glued into his backpack,” due to safety fears raised by “the reported death of a child who had swallowed a red plastic missile” from a Battlestar Galactica toy. (Vintage Star Wars collecting expert Chris Georgoulias makes the case that the real story behind Boba’s non-firing backpack is more complicated.)

Even without a launchable projectile, the first-ever Boba Fett toy was a hit. Star Wars-crazy kids like Hal and me had plenty of time to dream up adventures starring the new character, time which also probably fueled his success once he finally hit the silver screen.

A quick survey of the online secondhand market shows that a Kenner 1979 Boba Fett action figure in used but nice condition can be yours for around $20-$40. Serious collectors know these figures turn up in a number of paint variations; one sought-after, European variant is molded in a blue plastic so pale it appears white. (Ironically, as I mentioned in my discussion of “Imperial Super Commandos,” the Mandalorian helmet and armor were originally designed to be white).

Anyone interested in rare Star Wars figures will ask: Is it possible to get a vintage rocket-firing Boba Fett figure today? Prototypes occasionally surface, and they command exorbitant bounties when they do. One sold on eBay in 2013 for $22,500, and the only carded prototype in existence was listed on the auction site for a cool $150,000 earlier this year.

Even vintage non-firing Bobas on their original cards carry steep prices on their heads. In January 2015, one such figure realized $27,000 (£18,000) at auction, the highest ever auction sale of a Star Wars toy. Its owner, Star Wars super-collector Craig Stevens, told The Guardian he believed his to be one of only 4 or 5 vintage Bobas still in “pristine” condition, right down to the board being “unpunched” (with no hole for hanging on a store display peg).

The Boba Fett Figure Through the Years

The Boba Fett figure was one of a dozen Star Wars figures Kenner also released in 12-inch versions. His accessories included a blaster, cloth cape, removable belt and backpack, and braided Wookiee scalps (ick, but it said so, right on the box!). Kids could peer through Boba Fett’s helmet to locate a target. They still couldn’t fire a missile, but they could extend Boba’s grappling hook.

In 1981, Kenner gave their 3 3/4-inch Boba a scale replica of Slave I. The ship, about 14-inches long and 4 1/2-inches tall, boasted “gravity-operated” wings that rotated 90 degrees when unlocked, moveable tail cannons, a nifty sliding mechanism for loading an action figure into the cockpit, and even a “frozen” Han Solo prop to slide up the rear access ramp into the cargo hold.

When Boba Fett showed up in a 1985 episode of the Star Wars: Droids animated series, the Boba Fett figure was reissued on a new card, with art in the cartoon’s style that depicts C3PO regarding Boba rather nervously (of course, Threepio regards almost everything rather nervously). The package also included a collectible gold-plated coin. Mark Bellomo, author of The Ultimate Guide to Vintage Star Wars Action Figures 1977-1985, told Mental Floss this Boba commands high prices—as much as $2600, depending upon condition—because “it was produced in far fewer numbers [than others], and the card artwork is uniquely different.”

A decade later, not even the already kick-butt bounty hunter escaped the “beefed-up” style of Kenner’s “Power of the Force 2” action figure line. At least the chunky, hyper-muscular look suits Boba better than it does Luke or Leia! Unlike the original 3 3/4-inch Boba Fett figure, this one boasts a screen-accurate paint job and battle damage as well as the Wookiee braids and a cape (although both those features were made of molded plastic).

In 2000, Hasbro (which acquired Kenner in 1991) celebrated the 300th 3 3/4-inch Star Wars action figure by releasing another new Boba Fett. It had an even more accurate and detailed paint job, a fabric cape, a movable rangefinder (like the old 12-inch figure had), and—drum roll, please—a projectile that actually fired! The two-decade-old dreams of Boba Fett fans had finally come true.

Mando Masks and Much, Much More!

The Boba Fett figures continue to be popular with collectors. When the Boba Fett Black Series figure arrived in 2014, for instance, we here at Entertainment Earth pre-sold out our supply of the quality, screen-accurate 6-inch figure.

But posing or playing with an action figure isn’t the only way Boba Fett’s fans express their dedication to the character. Some become the action figure by wearing a Boba Fett costume! For those without the time or talent to build their own costume and join The 501st Legion, the Halloween and masquerade party outfitters at Rubies offer a “Supreme Edition” of Boba Fett armor and accouterments that is remarkably screen-accurate, coming complete with jetpack and collector’s edition Mandalorian helmet. If you want a more economical option, Rubies also produces a vinyl Boba Fett helmet. Flexible enough to mold to your face, it’s a lot more comfortable than the real deal, but just as intimidating!

On the other hand, why put up with any discomfort from Boba Fett armor at all when you can get cozy in a Boba Fett bathrobe instead? 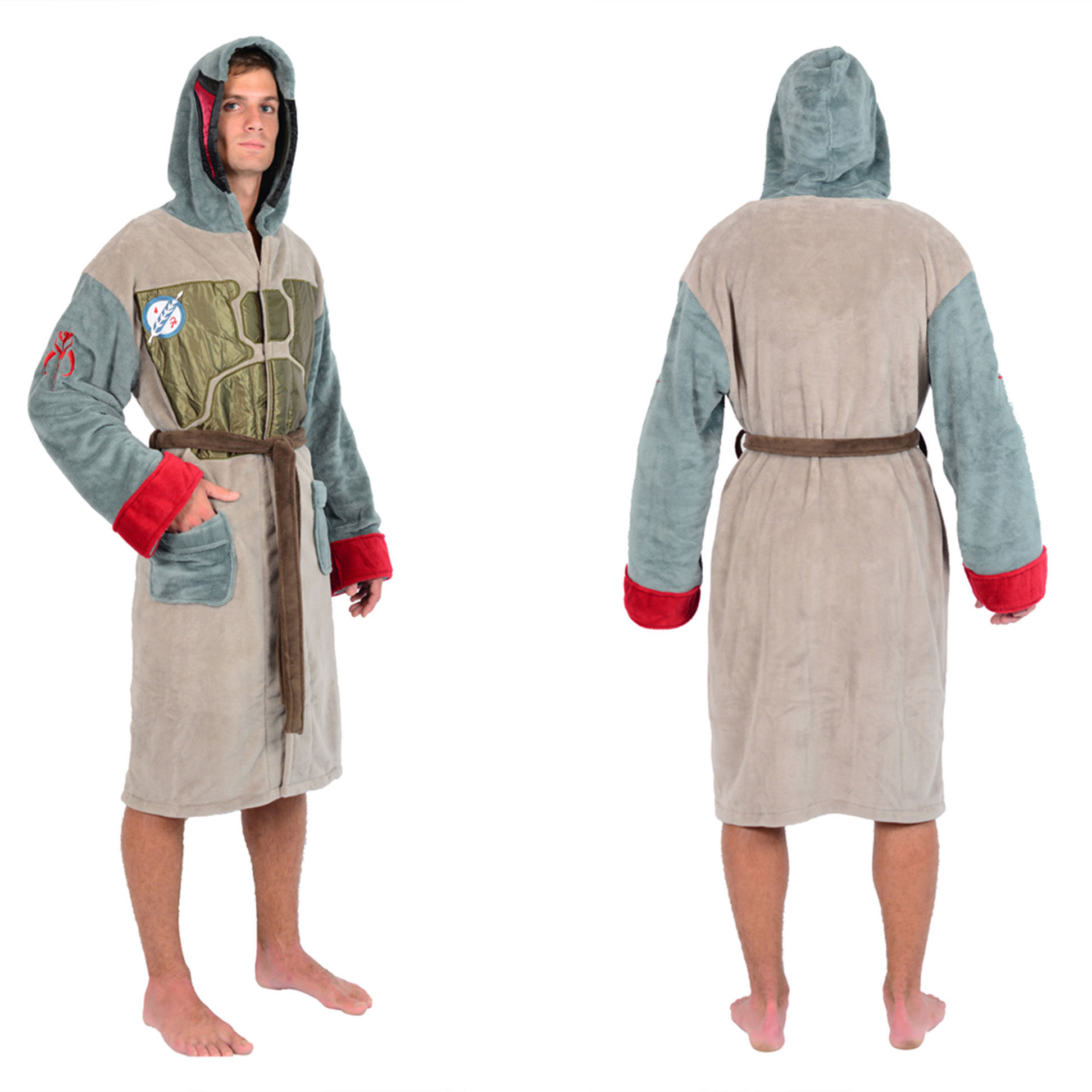 This polyester fleece panoply is only one example of how the public’s continuing fascination with Boba Fett has inspired creative twists on the bounty hunter’s iconic image.

You can hang his visage on your wall or around your neck.

You can place a Mandalorian welcome mat outside your door or decorate your car doors with Boba Fett decals.

You can store your data on a Boba Fett flash drive while sipping some nice, hot, non-canonical spiced caf from our exclusive Mandalorian ceramic stein.

All these items represent a small sample of the Boba Fett toys, Boba Fett collectibles and other merchandise available to Star Wars fans in general and Boba fans in particular.

So happy “birthday,” Boba Fett! We do indeed see “why they call you the best.” As long as we denizens of this galaxy daydream about living by our own code and looking super-cool while doing it, as you do in yours, you’ll claim a special place in the imaginations and hearts of Star Wars fans.

This is just a brief history of Boba Fett toys. Did we miss your favorite Boba Fett collectible? Let us know in the comments!