Aboard the Executor, Darth Vader has a meeting with six bounty hunters to put out a hit on the one and only Han Solo. Of the six, Boba Fett is the one that captures the target and the most screen time. Even though we only get a glimpse of the other five they definitely make enough of an impression to become instant fan favorites. This has spawned so many collectibles over the years ranging from action figures to premium statues and now Gentle Giant’s new Collector’s Gallery statue series. These high-end premium statues are highly detailed from sculpting to paint that is perfect for fans of these ruthless killers.

First to be launched was IG-88. This assassin droid has a rich backstory not shown in the original trilogy, but you can read more about in a previous article of mine here. It goes that there are multiple copies that meet their demise after leading Boba Fett to Han Solo, thus making them archenemies. No wonder this droid is sculpted so intricately in a defensive stance with its gun drawn. Each statue is hand-painted and individually numbered with a certificate of authenticity. Fans of this bounty hunter can still pre-order IG-88 now to solidify this statue to their collection when it is released in October. 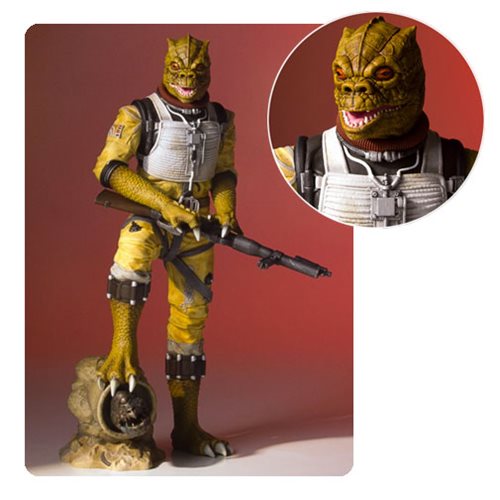 The second addition to the bounty hunter set of Collector’s Gallery statues of this Trandoshan bounty hunter, Bossk. Covered in yellowish green scales and sporting oversized sharp claws, Bossk strikes fear just by his brooding looks. That’s really all we get from that brief scene aboard the Executor until the Star Wars: The Clones Wars and Star Wars Rebels animated series. He plays a pivotal role in mentoring the young Boba Fett and eventually is a captured prize to Jabba the Hutt.

This is where the sculptors at Gentle Giant have drawn their inspiration from for the statue above comes from. In the wake of Jabba’s death, we see Bossk standing over his fallen throne ready for whatever is next with his newly gained freedom. This limited edition, hand-painted 1:8 scale statue comes individually numbered with a certificate of authenticity. You can pre-order yours now to make sure you get him when he is released in January 2018. It is a stellar rendition of this ruthless killer and a must-have addition to any bounty hunter fan’s collection.

Both of these statues are beautifully hand-crafted and capture our imaginations from that brief instance in Star Wars: The Empire Strikes Back. The next bounty hunter in this statue series is Zuckuss and Gentle Giant will keep releasing all of these bounty hunters so long as the fans keep pre-ordering them as they come out. My hope is that all six of these ruthless killers get a chance to be showcased for fans to add these amazing renditions to their collections.

Collectibles Statues
Related ItemsBosskBounty HuntersGentle GiantIG-88Star Wars
← Previous Story Get These Robots in Disguise before They Are Gone
Next Story → Funko Slays with New Line of Buffy Pop!s