Ok, it’s not THAT shocking that the famous martial artist and actor would have celebrated his 80th circle around the sun. But, it also is. Imagining Bruce Lee at 80 years old is kind of a trip. I reckon that the legend himself would still be able to kick some major booty. The icon is, after all, considered to be the most influential martial artist of all time.

This highly detailed and realistic statue of Bruce Lee, circled by a golden dragon Taijitu (yin-yang) symbol, is the perfect way to celebrate his 80th birthday and his never-ending status as a BAMF (look it up).

This approximately 11-inch tall resin statue is limited to an edition of 3,000 pieces and comes packaged with a numbered certificate of authenticity. Order your own Bruce Lee Premier Collection Statue before it’s too late! 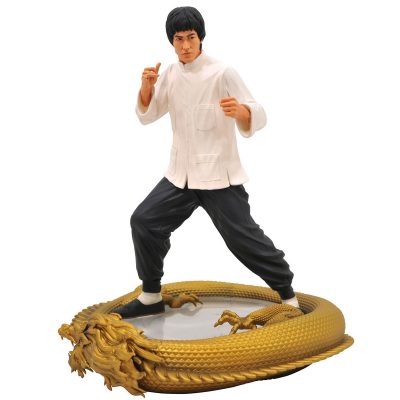 Collectibles Statues
Related Itemsbruce leeStatue
← Previous Story Here’s Why This Limited-Edition Frank Miller Batman Statue Is a Real Standout
Next Story → It’s Showtime! Here’s Why This Beetlejuice Bishoujo Is the Ghost with the Most, Babe!