BT21 Funko Pop!s Are Here and Cuter Than Ever!

Global superstar band BTS cleverly partnered with LINE FRIENDS to create its own characters and universe in BT21. The members created their own unique Funko Vinyl Figures, giving them quirky personalities and fun adorable looks. Check out the videos of BTS creating the BT21 characters:

Meet all the BT21 Pop Vinyl Figures below:

TATA, an alien with a heart for a head (created by BTS’s V- Kim Taehyung)

TATA is a prince from planet BT and has limbs and a body that can bend and stretch, along with supernatural powers. V has been drawing this character for years, and he was very keen to create something unique.

Adorable CHIMMY wears a yellow hoodie and was born with a passion to work hard on everything. While creating CHIMMY, Jimin said, “The animal that goes best with BTS is a puppy.” Adding, “We love to hang out, and we’re active, which reminds people of puppies.” 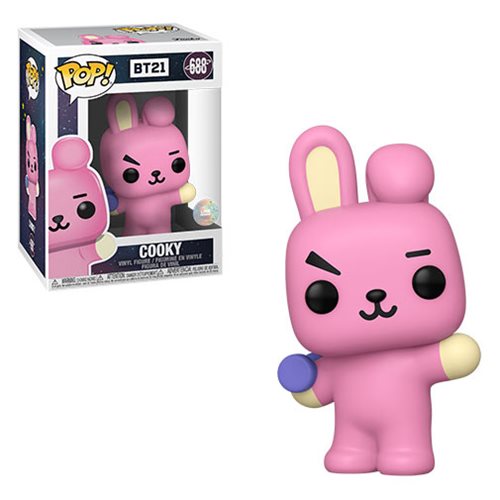 Jungkook created COOKY with the mindset to break stereotypes of cute bunnies and make a tough bunny. Jungkook is known for his intense workouts to maintain his six-pack, so in his initial sketches, he drew a rabbit with a six-pack.

This is not your average cookie – SHOOKY is a prankster. Tiny SHOOKY loves jokes, especially on friends. SHOOKY’S motto: NO MILK! During the initial sketching period, Suga drew his dog Holly, but it looked too similar to other characters, so he drew lots of different expressions inspired by Holly that became the many faces of the cookie.

This sleepyhead koala is named KOYA. Exceptionally bright and talented, the cutie is full of thoughts of sleeping. RM drew pages and pages of koalas in the creation stage, as he thinks koalas are super cute.

When dancing, MANG is cooler than ever. Veiled under a mask, MANG’s true identity remains a secret. The nose is heart-shaped because J-Hope is noted for his lips making a heart shape when he smiles.

Last but not least for the BT21 Funko Pop! line, Jin’s character creation is RJ, an alpaca who’s the ultimate foodie. Covered in fluffy fur, RJ is the perfect cute and comforting companion. Jin had been doodling adorable alpacas for years before this collaboration, so he was thrilled to bring one to life.