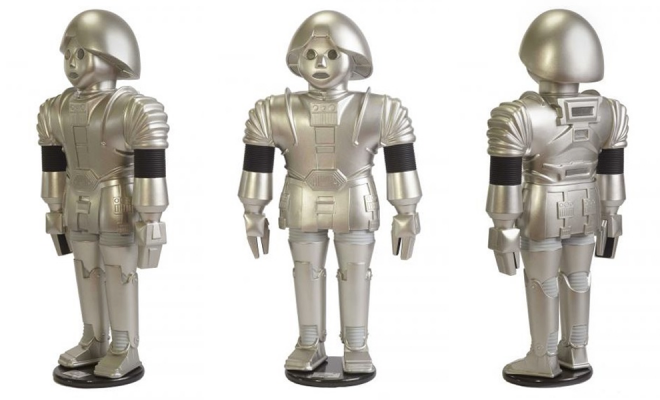 Fans of Buck Rogers in the 25th Century, get excited! The Twiki Robot 21st Century Edition 1:1 Scale Replica is officially a thing!

Twiki, the beloved sidekick of Captain Buck Rogers, has finally been brought to life for collectors everywhere! Never before has such a licensed replica of Twiki been offered. This Buck Rogers in the 25th Century Twiki Robot 21st Century Edition 1:1 Scale Replica has been made from hand-cast urethane resin, measures 48-inches tall, and weighs 45 pounds!

With a laser engraved and hand-numbered base plate, stainless steel trim pieces, a removable and positionable head, this limited edition collectible is an amazing piece of Hollywood history and is a must-have for Buck Rogers and the 25th Century fans!

Buck Rogers in the 25th Century is the story of a 20th century astronaut revived out of 500 years of cryogenic sleep and ultimately becomes the greatest hero of the future Earth. With the help of Dr. Huer, the leader of Earth’s Defense Directorate, the AI computer Dr. Theopolis, and the robot drone Twiki, Captain Buck Rogers must save the earth from the Draconians.

The Twiki Robot 21st Century Edition 1:1 Scale Replica is currently available for pre-order at Entertainment Earth and is scheduled to arrive in January 2015.