Stake Your Claim on the First Buffy Rock Candy Figures!

The Buffy the Vampire Slayer television series has one of the most loyal and vocal fan bases. The series recently celebrated its 20th anniversary and what better way to relive one of the most beloved shows than by obtaining some seriously cool Funko Buffy collectibles? The Funko Rock Candy line has made two beautiful vinyl figures capturing the glory of two of the core Scoobies!

Buffy Summers dressed in an outfit that looks very much like her outfit in a Season 5 episode of the show (I’ve watch the show several thousand times at this point). She stands 5-inches tall and has a very cartoonish and fun look. She comes fully equipped with Mr. Pointy and is ready for any vamp action that comes her way! 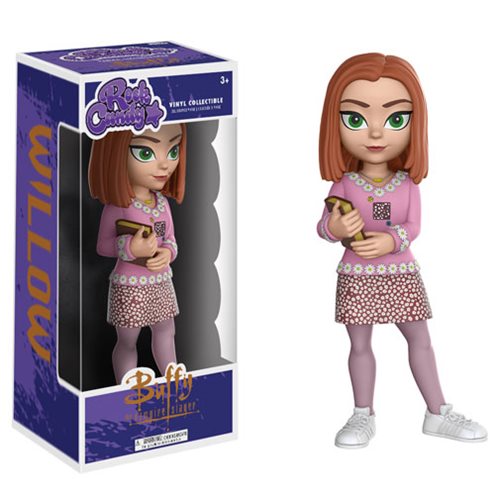 Meanwhile, Willow Rosenberg, Sunnydale’s resident Witch is wearing clothes straight out of Season 1 when she was just a big computer nerd with a heart of gold. Matching the cartoony vibe of Buffy, Willow comes holding a book because well… she’s a nerd (not that this is a bad thing).

Buffy will live on, seemingly forever. She’s been slaying the hearts and minds of fans for 20 years, and she’ll continue to be loved for many years to come. Collectors and fans alike need these Rock Candy figures!