Dr. Erskine knew he’d picked the right text subject for his Super Soldier Serum when he met Steve Rogers; he was not a strong man, but he was a good man. Just the sort you’d want to keep an eye out for the little guys, a man worthy of becoming a modern day myth.

Kotobukiya’s latest Cap statue depicts the classic Marvel hero with modern sensibilities. The Captain America Modern Myth ArtFX Statue captures the Captain in a brief, quiet lull between action scenes, one foot resting on a chunk of debris on a battlefield not too far from home.

His uniform is a nice mix of the old and the new, with the traditional overlapping scales at the top of the shirt; the winged, A-emblazoned mask; and the patriotic stripes down the torso and in the sleeves/gloves. With his trusty shield on one arm, Steve wears the serious, stoic expression of a man on a mighty mission.

This superpowered statue of the mythic Marvel hero stands 12 1/2-inches tall and is crafted from high quality PVC. Shipped safely packaged in a closed box, this Captain will make a valorous addition to any comic collection. Pre-order today and we’ll ship the moment he arrives in stock! 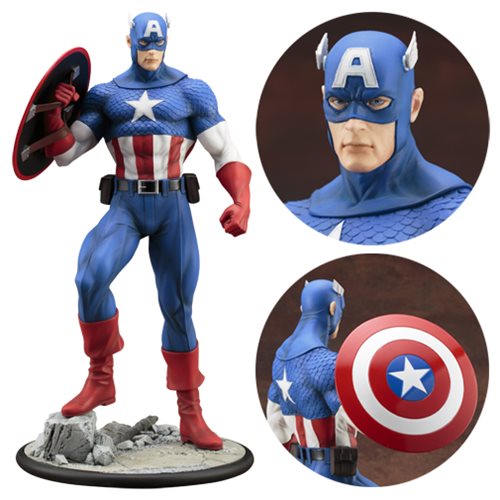