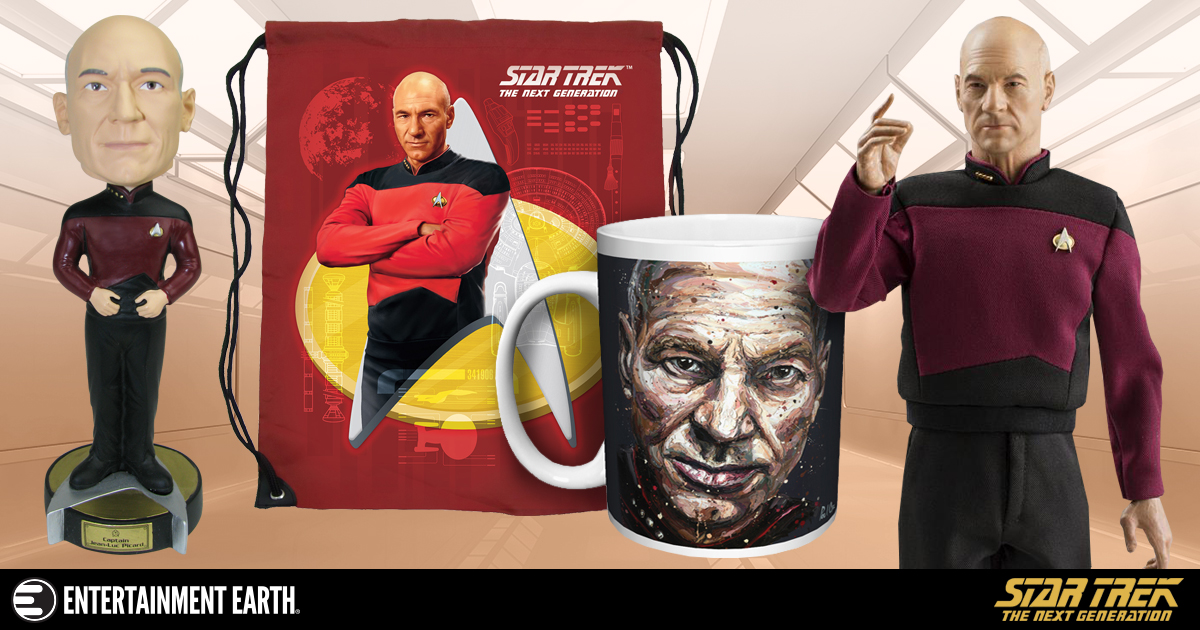 Introduced in-universe as a red-letter date on the Enterprise school calendar in the seventh-season episode “The Pegasus,” Captain Picard Day first moved out of the confines of Star Trek: The Next Generation and into the real world in 2007. June 16 is the date that corresponds to stardate 47457.1 (obviously) and, just like the starship’s schoolchildren, everyone who regards Captain Picard as a role model looks forward to it all year.

Looking for some cool collectibles to help you celebrate? Entertainment Earth has you covered.

(And you don’t even have to pick prize winners and honorable mentions – you can choose them all!)

Somehow, even as a bobble head, Jean-Luc Picard conducts epitomizes gravitas and nobility!

The Star Trek: The Next Generation Picard Bobble Head from Bif Bang Pow! stands a proud 7-inches tall, dressed for duty in the sharp two-piece, high-collared uniform introduced in TNG‘s third season. He’s even been sculpted mid-”Picard maneuver,” tugging that pesky tunic back into place! This painted resin figure will grace any desktop or bookshelf with Picard’s authoritative and inspirational presence.

If you prefer a poseable Picard, consider this wonderfully detailed 1:6 Scale Captain Picard Action Figure from the action figure artisans at Quantum Mechanix. Picard stands a foot tall and features more than 30 points of articulation, as well as seven interchangeable hands and six accessories – from a Type 2 phaser to a cup of his hot Earl Grey tea.

Outfitted in a dashing screen-accurate, soft goods uniform and bearing a hand-painted likeness that captures the captain in a resolutely determined mood, this Captain Picard action figure lends itself to virtually limitless posing and playing possibilities.

Sipping your own cuppa in honor of Captain Picard day? (Or perhaps something stronger, like raktajino spiked with Romulan Ale? Don’t worry, we’ll never tell!) You can do no better than Culturenik’s “Make it So” mug, which is adorned by a subdued, artistic, close-up portrait of the Enterprise‘s commander.

Perhaps it’s the art’s “weathered” look or the slightly wearied, careworn expression on Picard’s face, but this mug reminds me that even one of the galaxy’s greatest explorers needs a caffeinated boost! Treat it with care (as it is neither dishwasher nor microwave safe), and you’ll be able to spend many early mornings with Captain Picard.

Until we enjoy the 24th century’s replicator and transporter technologies, we’re stuck needing to get our stuff from place to place. But you can carry yours in commanding fashion with this durable polyester cinch bag emblazoned with Captain Picard’s likeness.

At 13-inches tall by 17-inches wide and having reinforced bottom PU corners with a grommet for the straps, this bag is the perfect choice for bringing a few essentials along during your next away mission.

Let us know in the comments: How are you celebrating Captain Picard Day 2017?