Disney’s villains are often even more iconic than their heroes, and Enesco is getting in on the love! Check out these fabulous new Disney Traditions Villain Statues! Like other Disney Traditions statues, these are cast in stone resin and designed by folk artist Jim Shore.

Three of Disney’s most entertaining villains are getting the Enesco treatment, beginning with perennial favorite Maleficent in the Disney Traditions Sleeping Beauty Maleficent with Scene Malevolent Madness Statue. Cackling maliciously, the Sleeping Beauty antagonist revels in her evil deeds, bringing down curses on her enemies. Her robe is decorated with the climatic scene where she battles Prince Philip in dragon form. At 8 3/4-inches tall she will make an imposing addition to any collection.

Next up is fabulously fashionable Disney Traditions 101 Dalmatians Cruella De Vil Devilish Dognapper Statue. It really says something about her appeal that she can be a puppy killer and still be so popular—or maybe it’s less love and more love-to-hate? Either way, Cruella looks magnificent in her lush fur coat and sleek red gloves. Her little black dress is covered in henchmen Horace and Jasper rounding up the adorable puppies to make an adorable coat. Cruella is 8 1/4-inches tall and stands on a tiled base decorated with Dalmatian spots.

The final addition to the current villains line-up is everyone’s favorite sleezeball Greek god/car salesman, Disney Traditions Hercules Hades Masterful Manipulator Statue! Hercules doesn’t often get a lot of love, so fans of the film will be excited to get their hands on this statue for their collection. Hades triumphs as his key pawn Megara succeeds in winning over hero Hercules, as depicted on Hades’ own robe. Hades cuts an impressive figure at 9-inches tall.

All three of these statues are available for pre-order at Entertainment Earth, with expected delivery in December — just in time for the holidays! 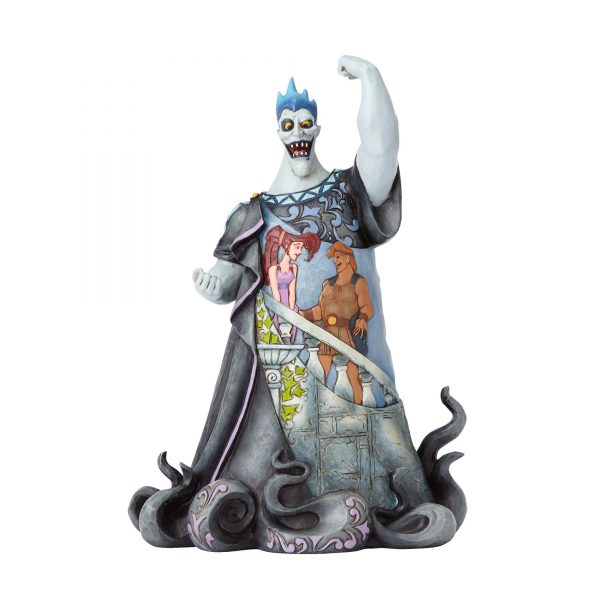