Celebrate the 30th Anniversary of Dream Warriors with NECA 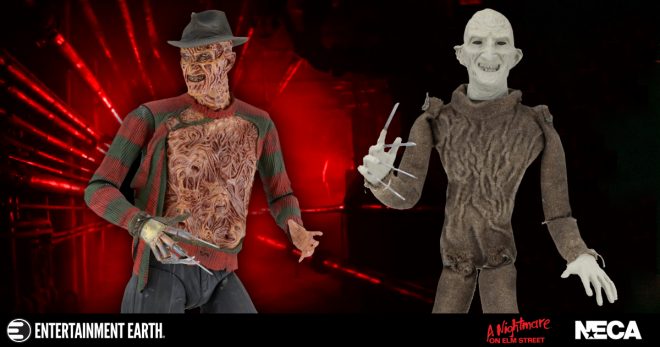 Hard to believe it, but the third installment of the classic horror series – Nightmare on Elm Street: Dream Warriors – is turning thirty this year!

(And Freddy still looks freshly fricasseed; what is his beauty secret? The blood of teenagers, one supposes.)

Ripped straight from Phillip’s nightmares, the Freddy Puppet Replica was created from the original head and hands molds used in the movie. His scarecrow-like fabric body was also faithfully replicated, and an inner wire armature makes him highly poseable. Freddy stands 18-inches tall and comes with a display stand — which is good, considering he’s already cut his own strings.

Meanwhile, the 1:4 scale Freddy features plenty of interchangeable gruesome detail. Swap out his usual “evil Freddy” head with a “crucifix head” that has light piping effect, or pull off his iconic sweater front to reveal the tortured spirits trapped in his horrific Chest of Souls. Freddy has over 25 points of articulation to allow for several poses straight from the movie, and comes packaged in a collector-friendly deluxe window box.

Both Freddies will be haunting out shelves – and dreams – come June, so pre-order now to secure your own snarky sweater-wearing mass-murderer!