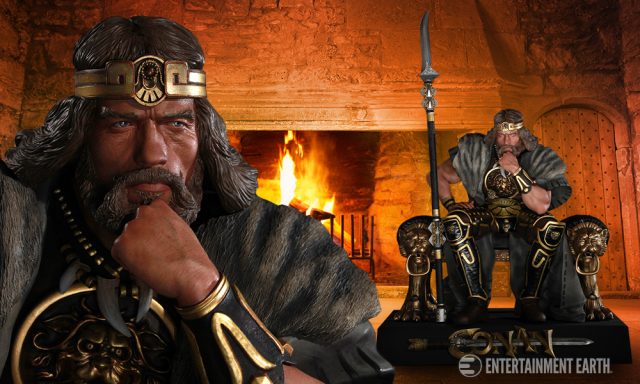 The final shot of the original (and only relevant iteration of) Conan the Barbarian shows Conan, sitting upon a throne, a king by his own hand. It is a breathtaking shot, to be sure, but it is also an emotional shot that took the entire movie to build up to. At the beginning of the movie, the narrator tells us that Conan is “destined to wear the jeweled crown of Aquilonia upon a troubled brow.” Then, the entire violent and articulate sword and sorcery movie builds up in a way to show that Conan is powerful and self-actualized. So that final shot was well-earned; it resonated with audiences as being the perfect, epic ending to one of the greatest adventure movies of all time. Now, this Conan the Barbarian King 1:4 Scale Statue has earned the place as one of the most epic collectibles of all time.

Coming in at an impressive 21-inches tall (to the tip of the spear), 15-inches wide, and 12-inches long, this limited edition statue is one hefty artifact for your collection. It commands the attention of every onlooker, a perfect representation of the final cinematic scene. Conan is aged and shaggy, wearing the crown that he placed by his own hand upon a brow that is not only troubled, but somewhat bored. With his greatest adventures in his past, what more can await an aging king? That is the plight of all ancient heroes.

When we say that this item is limited, we mean it. There will only be 500 pieces made of this statue, ever. This means that you have a very limited window in which to act. Yes, it’s an expensive one – not everyone has a piece that costs this much on display! But with the limited opportunity and impressive detail and scale, this isn’t the kind of item that you want to be without. In order not to miss out, you need to pre-order yours today with Free U.S. Shipping at Entertainment Earth!

» See All Conan the Barbarian Collectibles