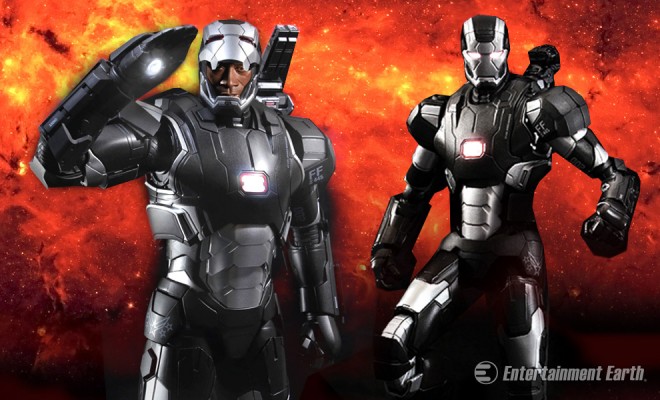 Do you know what’s cool? Superheroes flying around in metal suits saving the day. Which is why these Iron Man 3 super alloy die-cast metal action figures from Comicave Studios are so awesome!

Tony Stark and his best fried Rhodey are teaming up to take down the Mandarin and they’ve got some serious power on their side.

The Mark XL (40), fondly named Shotgun, is currently the fastest suit in Tony’s Iron Legion, and can reach speeds in excess of Mach 5. Just watch as you display this figure on its flexible arm stand to show it flying.

Rhodey’s not about to let Tony have all the fun, though, and so he becomes War Machine. In a color scheme of black and grey, this guy isn’t someone you want to mess with and his swiveling canon shows that.

A decorated officer in the US Air Force, Rhodey gets a new suit honoring this part of his life. Meet Iron Patriot, decked out in red, white, and blue. He has a star on his chest and cannon on his shoulder so watch out.

Each figure is made of 75% metal alloy and measures 6-inches tall at One:12 scale.

Oh wait, there’s something I forgot to say! War Machine roxx. And that’s why he gets a second figure, this time in 1:4 scale measuring an impressive 18-inches tall. This guy even features an incredible sculpt of actor Don Cheadler as Rhodey.

All of the figures are articulated and come with interchangeable accessories as well as LED light-up features. After all, a robotic suit isn’t cool unless it lights up.

These iron men are available now at Entertainment Earth with free shipping.