“Each costume presents its own set of challenges, requiring me to learn new skills like translation, sculpting, molding, casting and of course, sewing.” – Riddle

For the mastermind behind Riddle’s, cosplay is the art of translation. A native to Canada, Riddle now lives in the United States, where she hones her vast repertoire of costuming skills in both the international cosplay community and the professional film industry, where she worked on films like Free State of Jones, Big Momma’s House: Like Father, Like Son and X-Men: First Class as a Special Effects PA.

More than merely a list of costumes, Riddle is an inspiration to cosplayers everywhere. I had the wonderful opportunity to speak to her and I was blown away by her graciousness and openness. While most cosplayers are kind-hearted, Riddle goes above and beyond. Not only is she willing to share her tips and tricks with cosplayers of any level, she also started Cosplay for a Cause, a charity organization where cosplayers work together on a project and 100% of the proceeds are donated to various charities such as the American Red Cross.

For Riddle, costuming is both a technical challenge and a personal connection. She shared that “the question of who you should be is a personal one, so you should always choose characters you like. At its core, you like this character for a reason, whether it be the design, personality, etc.”

Her humble beginnings in cosplay started with the titular character from Devil Hunter Yoko in the late 1990s: “I said ‘I want to be that’ so I had my friend’s mom help me make the costume and I went out. I came from a very rural town in Canada and no one had any idea who I was. I just had fun because I got to be like the character and dressed like the character. . . It was kind of a way for me to get out of my shell.”

Everybody starts somewhere and knowing where Riddle started is truly inspiring. She shared that she can’t bear to part with her first costume and said “I would love to get a bunch of cosplayers who have a portfolio of costumes under their belts and have them recreate one of their first costumes with the skills they have now and then put up a picture of a side by side.” Well, I can’t wait to see that project accomplished!

Riddle started cosplaying before there was access to the internet, but that didn’t stop her from watching how the internet has improved the cosplay community. “Now with Youtube and tutorials and everyone sharing information, the quality [of costumes] has skyrocketed.” With access to all of that information and tutorials, as well as fabric stores and wig shops, the cosplay community boomed.

Which costumes are you most proud of and which are the most comfortable to wear? 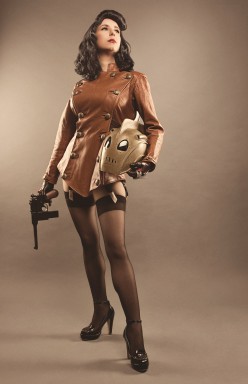 I’m always in love with the newest costume I’ve done. It’s kind of a love-hate relationship actually. Then you get to the end and you reflect on what you could have done differently. You are pleased the costume is finished, you take what learned and apply it to the next outfit.

But I really love wearing Snow White because the kids just come up to you and think you’re a Disney Princess and that’s a pretty awesome feeling.

I also love the Rocketeer costume I have though I really love wearing anything with comfortable shoes, like Tira From Soul Caliber. It depends on the mood and sometimes comfort is key. Sometimes I want to be sexy or kid-friendly. I will often choose costumes based on the environment I’m going to be in.

Do you make your own costumes or does someone make them for you? How do you put everything together?

Over the last few years I’ve taken what people have taught me use those skills in making my costumes. I try to learn more and more with each costume that I do. I’ve been really fortunate to have people around me who are more skilled than me to kind of teach me how things are done. My husband taught me how to sculpt and cast things. A really great tailor friend “SMP Designs” explained how to do more complex sewing. I also apprenticed with a fine art mold maker. When I make costumes, I try to translate it into something looks like it could be believable in real world, so I do a lot of research about maybe what the outfit may have been based on. What the artist was drawing reference from and what materials were available at that time period. When you look at anime or comics, sometimes the costumes change from page to page. I always say you have to nail down the aspects you like and don’t like and figure out how you want to make it from there.

For those starting out, you might only be skilled at one thing so it’s not unusual to have collaborations between people. Say you are really skilled at sewing and you have a friend who is skilled at props, Like in movies you have a vision so you get the best people for the job to accomplish your vision. Plus it can add to the fun and frustration of building a costume.

How do you dedicate time to costuming alongside everything else in your life?

If someone knows, they can certainly tell me! I get distracted very easily and I honestly don’t know. That’s why I take a long time to do things. Since it’s my hobby, I try to not get burned out doing it but I honestly don’t know. There are some folks who can just bang things out and I am just not one of those. One of the worst things for most cosplayers is that they always assume it’s going to take less time than it really does. [Costuming] is not a job but it’s pretty much the same hours or more than a full time job, but it’s all stuff I enjoy, other than hitting those costume road blocks! Or paying a $75 a yard in fabric, that can be painful.

I work part time for a comic book artist as a personal assistant and just recently I’ve gotten to work on a couple movies as a specialty costumer. Just recently I got off a Matthew McConaughey movie and I’m hoping to work on a few other movies now that Atlanta has more movie work. I was also part of the team on Beast (taking care of Nick Hoult) while X-Men: First Class was in Georgia. I got to work with people who excel in their field. And they’re so open with their information and it just reaffirms I’m not an advocate of hording information.

What inspires you when you’re working on your costumes?

Watching makings-of can kind of motivate you, like ‘look at what those people are making.’ Seeing the latest designs from the newest movies, watching a new naime or playing a video game. I am blown away by how other solve design challenges. In fact I get over inspired and as I’m working on one outfit, I want to start something new I have just seen.

Do you have a favorite in-costume or convention moment?

At Dragon-Con this year, I was dressed as Princess Leia and I was walking around and this little Darth Vader started running towards me… I kind of get on the ground and he crawls on my lap and doesn’t want to leave my lap. It was really super adorable. Another memorable thing is getting to travel the world based on doing I love.

I’m always really flattered when people come up to me and tell me that I’ve inspired them. It’s really humbling and extremely flattering.

I didn’t do it to become famous on the internet, I just did it because I love the characters, and it’s so moving when that makes a difference to other people. I’m just a geek and I just dress up and make costumes, and in a weird way that inspires people. I have no words.

What are you working on now and who are you planning for the future?

I’m actually working on Squirrel Girl but it’s more of an original take, trying to make it more realistic as if she existed in one of the Marvel movies. I’m putting together a calendar for Cosplay for a Cause and approached other cosplayers to be a part of it, the proceeds are for the Wildlife Conservation Society. I rehab and release baby squirrels, I thought it would be great because I can work my squirrels into a photo. Seriously though, its one of the most rewarding things to get to the point where you release them and they are free and you get to see them in their natural habitat.

If time and money were no issue, what dream costume would you love to make?

Dream costume would be from this anime called Bubble Gum Crisis and the character called Priss with this full female armor. It’s essentially like Iron Man’s armor but with really weird feet. I really want to translate it to something that can exist in the real world. I’ve wanted to do that since I started cosplaying because I love the design, character, and challenge of just trying to pull it off.

It’s this weird thing where I’m worried that if I do do it… is that it? Am I done? I will do it eventually. It will happen. It’ll just involve me doing nothing else for a full year.

Do you have any tips or tricks for improving your skills? Any advice for aspiring cosplayers?

Oh, so many. Look at real life objects to translate them to the real world – what can I do to make this look real? Look at clothing from those eras for historical costuming. What fabrics did they use, sewing techniques, armoring, etc., so you can get a concept of what real world items they may have been based it on.

You don’t always have to go to fabric stores. Go to thrift stores. It’s all really cheap and you don’t feel bad if you make a mistake.

Don’t hoard information. People are so open with their information. For me I have no problem sharing information, because ultimately if information helps someone make a better costume I’m happy. People have been so generous with me and I want to pay it forward. Hoarding information just doesn’t benefit anybody because we’re a community. The way to make the community better is just by sharing.

What else do you think we should know about cosplay?

Everyone should try cosplay once for sure. All the most important people in my life I’ve met because of cosplay so I really can’t imagine my life without it.

People focusing on the their craft and making quality costumes has really helped bring this community to the light and help people outside the geek community start to take it seriously.