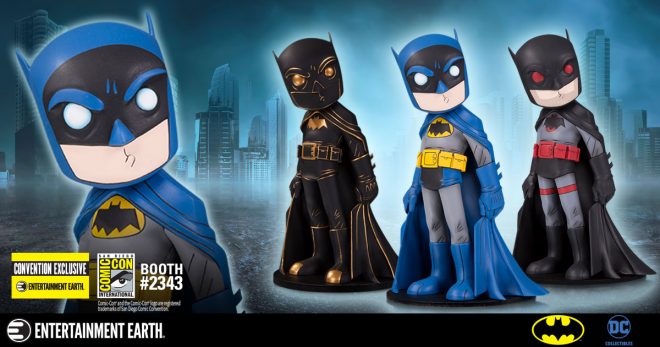 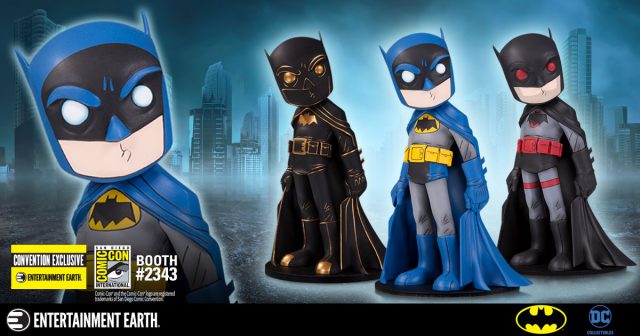 Through the years, we’ve seen so many iterations of the Batman character. The style and color of the costume have changed as the character progressed through the decades. This transformation in the Bat-Man’s creative fashion sense has also allowed for various incarnations of merchandise and collectibles of this character. This continues as this year at San Diego Comic-Con, Entertainment Earth is proud to announce three exclusive Artist Alley Batman statues. Each one has a limited number of units available, so you’re going to need to act quickly to acquire these very exclusive and extremely awesome figures.

The figures are designed by Chris Uminga, a Connecticut-based painter and illustrator who draws influence from classic movies, Saturday-morning cartoons, graffiti, and low-brow/outsider art. His work on the Artists Alley line for DC Collectibles takes some of comics’ most iconic heroes and reimagines them in his signature style: bright eyes, oversized hands, and a playful mix of creepy and cute. 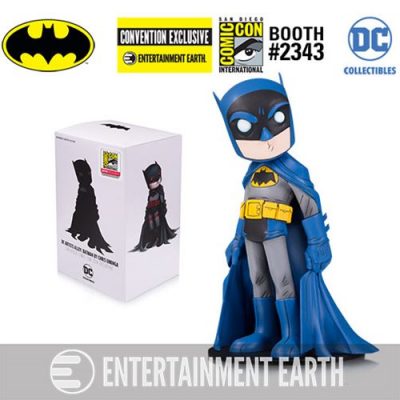 This Batman takes the classic blue cape and cowl combination known to fans of any age and tweaks it with a dark splash of black on the mask and shorts. It’s a clever and subtle change that’s sure to catch the eye of Batman fans and foes alike. The DC Comics Artists’ Alley Batman by Chris Uminga Blue and Gray Variant Designer Vinyl Figure – SDCC 2018 Exclusive is a limited edition of 1,500 pieces that comes packaged in a closed box. 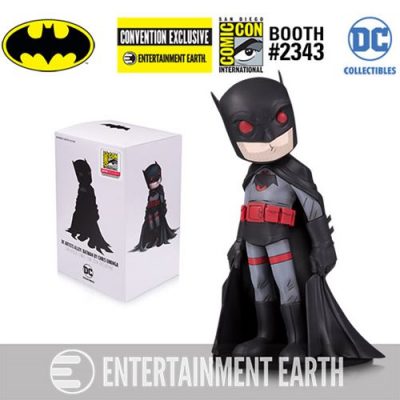 In this alternate timeline, the Wayne wearing the Batman cape and cowl is not Bruce, but his father, Thomas. In the years since Geoff Johns’ iconic Flashpoint’s run, the deep-red accent color and grizzled beard have become iconic in their own right. The DC Comics Artists’ Alley Batman by Chris Uminga Flashpoint Variant Designer Vinyl Figure – SDCC 2018 Exclusive is a limited edition of 750 pieces that comes packaged in a closed box.

Minimalist. Threatening. Golden. All are true of this hyper-exclusive Batman variant, but perhaps none are as important or thrilling as this one: extremely rare. This black-and-gold matte colorway is a true showstopper! Limited to only 300 units, each figure comes with an exclusive signed art card from designer Chris Uminga.

The first opportunity for fans to grab these DC Collectibles’ Artists Alley statues will be at San Diego Comic-Con on July 19, 2018, at the Entertainment Earth booth #2343. Hurry – there are only a limited number available!

*NOTE: This item will first be sold during San Diego Comic-Con 2018 at the Entertainment Earth booth #2343. If supplies remain after the show, pre-orders will be filled and shipped to you then, in August 2018.