Last Wednesday night, we were lucky enough to see DC Collectibles proudly introduced the world to a remarkable new line of collectibles. And these statues and figures quickly became the talk of Comic-Con.

The Batman Black and White Batman by Becky Cloonan Statue is perhaps one of the darkest and most arresting Batman statues that any of us have ever seen. With its imposing design and a shape that defies its translation into the third dimension, this 7-inch statue is downright shocking.

Batman doesn’t go anywhere without The Joker trying to get in on the act, and he did so in a big way. A bit jealous of the Batmobile, the Batman: The Animated Series Jokermobile Vehicle comes at you in vivid color. Looking just like an object pulled from the beloved television series, this vehicle pulls no punches on detail.

Not one to miss out of big DC news these days, Wonder Woman joined the party with the DC Artists’ Alley Wonder Woman by Chris Uminga Statue. Much like the Batman and Superman vinyl figures, this statue presents a fascinating look for Wonder Woman.

The other leading ladies of DC Comics were there to share the spotlight, too. Harley Quinn took center stage with a few new statues, all looking unique and breathtaking. The Red, White, and Black Harley Quinn by Babs Tarr Statue catches the vixen in mid-air, wearing skates and wielding her hammer. This statue is made of poly resin and come on a Harley Quinn display stand.

And one more heroine got in on the action, in a big way. The DC Bombshells Green Lantern Jessica Cruz Statue stops wrongdoers in their tracks. There’s a good chance that with her good looks, she’ll stop more than wrongdoers, as well! 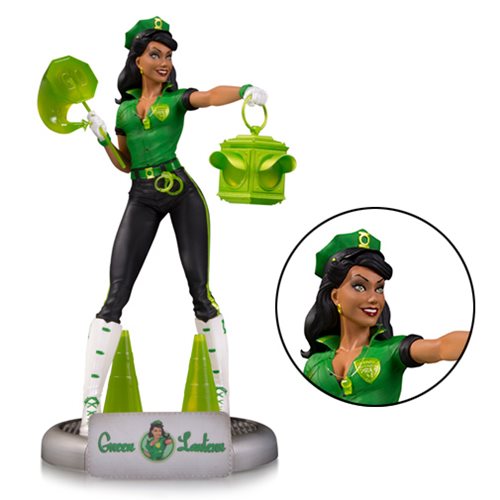 What was your favorite DC Collectibles statue or figure that was recently announced? Let us know in the comments!

Action Figures Collectibles Statues
Related ItemsDC CollectiblesEntertainmentFigureSDCCSDCC 2017Statue
← Previous Story You Don’t Have to Wait for the Aquaman Movie to Catch a Glimpse of the King and Queen of Atlantis
Next Story → This Early Bird Kit Will Make Star Wars 40th Anniversary Celebration Big Fun!