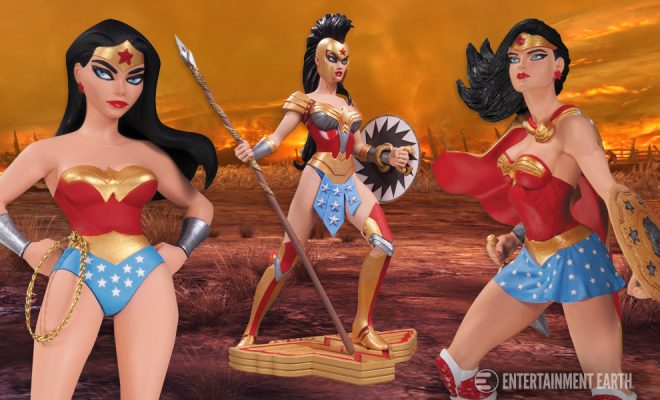 Like most superheroes, Wonder Woman has gone through a myriad of reinventions and re-imaginings since her debut in 1941. The Amazonian hero has captured the heart and creativity of artists for decades. DC’s Wonder Woman Art of War Series capitalizes on her massive popularity by bringing the art of iconic comic artists to life.

Designed by well-known artists who have turned their hand to Wonder Woman, the series presents Diana ready to charge into battle. Each statue is given a limited run and stands on a thick Wonder Woman logo base. Here are our top three favorites that you can order right now!

Wonder Woman has gone Greek in this powerful design by an all-female creative team spearheaded by Amanda Conner. The armor recalls that of the Ancient Greeks, while keeping Wonder Woman’s modern iconography intact. The Lasso of Truth is wrapped tightly around her spear, and the traditionally leather skirt is studded with silver stars. Most eye-catching though is her helmet, with plumes the same raven black as her hair.

Bruce Timm’s streamlined, graphic style has become a hallmark of DC animation in the last decade thanks to his tenure on the massively popular Justice League animated series. Beauty in simplicity is Timm’s MO, and it gives this statue a sleek, classic look. It’s Wonder Woman at her most iconic: tiara in place, lasso on her hip, and poised to kick your ass.

Combining the classic look of Timm’s design with the armored Conner’s, Jim Lee’s Wonder Woman is the best of both. Here, Wonder Woman is captured mid-battle, armed with shield and knife, calculating her next move. Her cape and hair billow around her, adding to the dynamic composition. Of all the statues in this range, this best encapsulates the Art of War idea. Wonder Woman looks strong, resilient, clever, and like she is engaged in war with her opponent.

Given the limited run of these statues you need to get in quick to secure yours. You can find all three available for order at Entertainment Earth, along with four other statues in the series!