Want to celebrate your love of DC Comics’ larger-than-life heroes and villains on a more manageable scale… and at a price you don’t need Bruce Wayne’s wealth to afford? 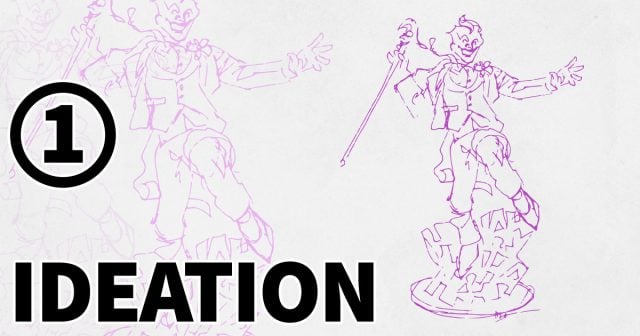 Sculpted and painted to authentic perfection, these statues look like they sprang directly from the comic book page.

But to get the real scoop on how DC Collectibles crafted these stunning statues, we talked to Jim Fletcher, executive creative director of DC Collectibles.

How did DC Collectibles come up with the idea for this line?

We noticed there weren’t any statues representing DC characters in a cool and dynamic way at this size and in this price range. With this new DC Core line, we can get something exciting but a little more affordable into the hands of fans who don’t want to spend $300 on a statue or worry about it breaking if it falls off a shelf.

It’s our first collection of PVC statues. They have the same quality and intricate attention to detail as our resin statues, but are far less fragile, and are at a lower price point. PVC material also allows for more dynamic poses, so you won’t see many of these designs anywhere else.

What research did you do before you began?

The design team looked at the market and saw a gap we thought our collector base would appreciate us filling. That’s one of the best parts of our jobs since all the designers here are collectors as well!

How involved was DC Entertainment proper in the creative process?

The team from DC Collectibles, DC’s in-house line of collectibles, developed this line. We look to the comic books for character inspiration and costumes, then try to kick that up a notch!

What did the initial sketches or renderings look like?

Basically, they were a number of scribbly gesture drawings trying to convey the character’s general shape and pose. I usually start with a very loose rough draft. We also try to have some storytelling moments as we work through the pose. I actually had a lot of fun designing The Joker statue; he’s one of my favorite DC characters! And I am actually working on new ones right now.

How much did the products change over this process?

The product evolves as we run the drawings past various design team members for feedback, to see what kind of pose is resonating with them. We also have to make sure we can afford to make the statues, so the production and business teams weigh in as well. After the input, I’ll tighten the concepts up quite a bit, then add color to send to the sculptor.

How did you decide which details you put into the products?

What did the first prototypes look like? How much retooling went on during this stage?

Many projects get adjusted as they go through the final costing stage and as production begins. And these final projects differ from the paint masters and original concepts. The original Batman figure had a gargoyle base. The Joker’s base was a bigger and more colorful stack of HAHA’s, to elevate him off the ground. But the final poses remained essentially the same as seen in the first sketches.

From ideation to the final product, how long did it take you to create this line?

Each one of these statues takes around 10-12 months to develop, from the original concept sketch, until it’s in-store date.
And after they’re in the market, what’s next?

We monitor sales and make sure the statues are moving at the amount we projected, so we know we should continue developing more.

What other DC Core statues can we look forward to?

You can expect to see a Wonder Woman statue and a Batgirl statue this year, and a statue of The Flash in April 2019. We have a few more surprises later next year as well!

Anyone who’s a fan of these characters will be excited to display these figures when they see all the detail and energy these statues will bring to their shelves.

The DC Core line brings vibrant character, compact display size, and budget-conscious pricing together in an unbeatable way, and is sure to prove popular with collectors.

So make these detailed and energetic statues part of your DC Comics collection today by clicking here to order Batman, Batgirl, The Joker, Wonder Woman, and The Flash.

And keep watching the Entertainment Earth website for breaking news of new additions to the DC Core line!

If Jim Fletcher asked YOU to nominate the next hero or villain for inclusion in the DC Core line, who’d get your vote and why? Tell us in the comments section below!