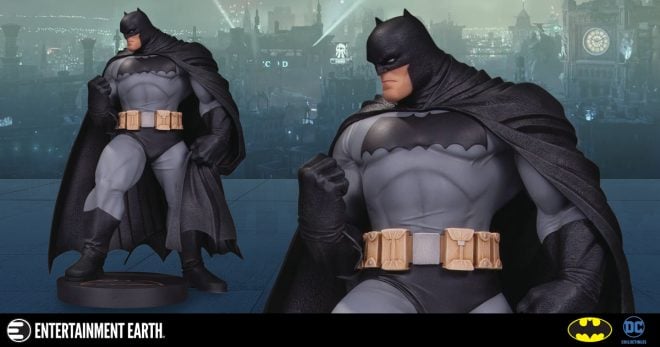 Frank Miller is a legend in the comic book world. Best known for Sin City, 300, Ronin, Daredevil: Born Again, and notably The Dark Knight Returns (TDKR). The latter turned the Batman legend on its head by jumping into Bruce Wayne’s future and showing us what it might look like to see him as an old man. Miller also gave us glimpses into what the rest of the Justice League would look like as well. TDKR is still one of the most read Batman books and Christopher Nolan took a lot of inspiration from its panels, as did Zack Snyder’s Batman v Superman: Dawn of Justice. In November 2016, Miller released the third entry into the TDKR lore with The Dark Knight III: The Master Race. Miller, along with artist Andy Kubert, continued the legendary story of old man Bruce fighting crime as the Batman.

Kubert’s incredible design of has been captured in this DC Comics Designer Series Dark Knight III Mini-Statue, which is a limited edition of 5,000 pieces! As part of the DC Comics Designer Series, Bats stands 7-inches tall and looks exactly like he does in the book. The memorable black and grey costume with the larger bat emblem on his chest, this version of Batman is a muscle covered behemoth ready to fight the recently released inhabitants of Kandor.

Any true Batfan needs to have this statue as part of their collection and with a limited edition run, you’ll need to act fast to get yours.