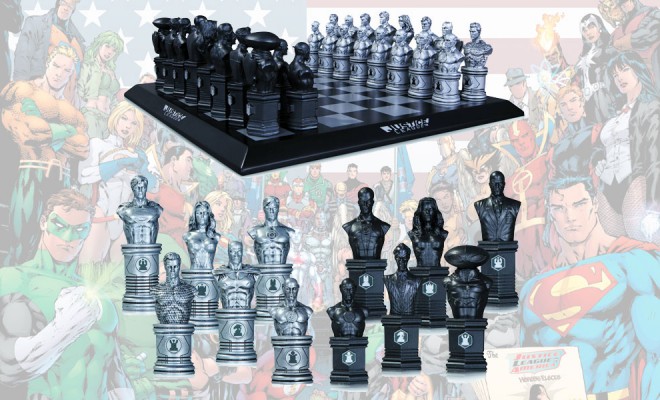 The battle between good and evil has arrived in an all-new way with this DC New 52 Justice League Chess Set. Who will win? Now you decide!

Based on their New 52 designs, it’s the Justice League vs. the Legion in this particular war. The intricately sculpted and weighted resin game pieces include Superman, Batman, Green Lantern, Wonder Woman, Aquaman, the Flash, Lex Luthor, Black Manta, the Joker, Cheetah, Sinestro, and the Reverse-Flash. Each piece stands between 3 1/4 and 3 3/4-inches tall with a classic, black and white color scheme.

On the Justice League’s side, Superman and Wonder Woman make up the king and queen. Batman is the knight, Green Lantern is the bishop, Aquaman is the rook, and the Flash rounds out the team as the pawns. The Legion’s team consists of Lex Luthor as the king and Cheetah as the queen. Their subjects are the Joker as the knight, Sinestro as the bishop, Black Manta as the rook, and the Reverse-Flash as the pawn.

This marvelous collectible chess set comes with a high-quality wooden chessboard. The clean and classic chessboard is elevated, with the sides slanting upwards and reading “Justice League.”

Pit heroes against villains and find out whose strategy is stronger! This epic chess set is currently available at Entertainment Earth.