Take Home the Caped Crusader with These SDCC Exclusives 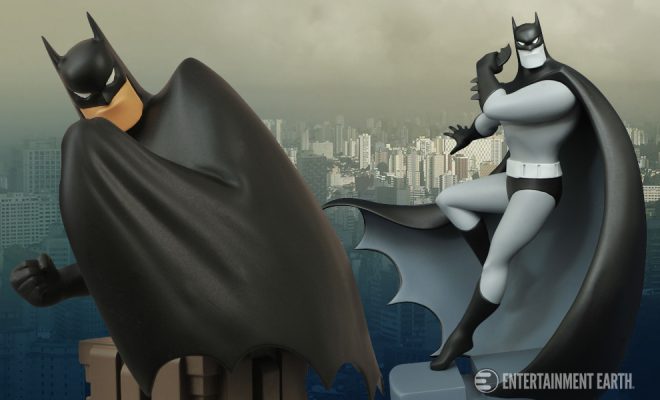 San Diego Comic-Con 2016 is just around the corner! If you’re one of the lucky ones who managed to snag a pass, make sure to check out these Batman: The Animated Series SDCC 2016 exclusives.

The Batman bust is reminiscent of the classic logo of the beloved series. The Dark Knight clutches his cape while posing atop a pedestal inspired by the show’s art-deco architecture. The bust is 6-inches tall and cast in resin. Packaged in a full-color box with a certificate of authenticity, this exclusive collectible is limited to 1,000 pieces.

The Batman statue is 9-inches tall and captures him in a monochromatic color scheme. This PVC figure is based on his appearance in the Batman: The Animated Series episode “Almost Got ‘Im.” As you can see, this exclusive collectible is both sculpted and painted with the highest level of detail. Packaged in a full-color window box and sculpted by Varner Studios, this statue is limited to 2,000 pieces.

NOTE: These items will first be sold at San Diego Comic-Con 2016. If supplies remain after the show, your order will be filled. We reserve the right to limit quantities ordered.

Both versions of Batman will be available September 2016. Place your pre-orders with Entertainment Earth now!