Recently, Twenty-First Century Fox shareholders got quite a surprise. For the first time, their Fox shareholder letters came with The Walt Disney Company letterhead in the form of the official stock election (see below). While there have been initial reports that Disney’s $71.3 billion acquisition of Fox was near the end, with both companies approving the Merger Agreement on June 20, 2018, there have been no assurances as to when or if the acquisition will close.

Last year, Disney received conditional approvals from both the European Union and U.S. regulators and was waiting for approvals from Brazil and other countries. Back in July 2018, shareholders from both companies approved all proposals related to the acquisition, but neither company was legally allowed to give a solid date for the close. Disney CEO Bob Iger previously stated that “it could take up to 12 months for the acquisition to close,” while President of Fox Peter Rice said to employees, “The company will be logistically ready to close on Jan. 1.”

Based on the shareholder letter below, it looks like earlier speculation about the January 1, 2019, date was more in line with the actual acquisition timeline. The Disney-Fox acquisition marks an incredible shift in the entertainment industry and both fans and pundits alike are waiting with bated breath on any news on the completion of the merger. Based on new shareholder documents that we received it looks like it will be sooner rather than later. Here’s a quote for the document:

“Disney and/or 21CF will issue a press release announcing the completion of the Mergers when they are completed. You can obtain this information at the SEC’s website at www.sec.gov, at Disney’s website at https://thewaltdisneycompany.com/” 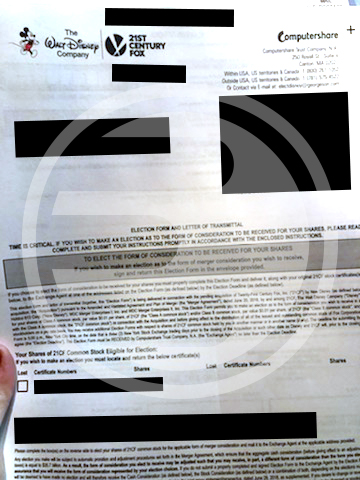