In This Marathon, It’s Not Wise to Let the Wookie Win

Honestly, just going to any Disney theme park is usually a work-out in and of itself. However, if you want do Disney parks in an all new way and work those quads, you might want to look into Disney marathons.

Disney’s latest half marathon weekend began yesterday at Disneyland and it was overrun by Wookies, Stormtroopers, and characters from a galaxy far, far away. The Star Wars Marathon Weekend is comprised of various events and runs for Jedi Masters, Knights, and Padawans and everyone in between. 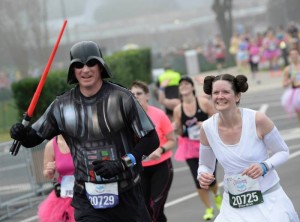 Whether you want to participate in basic runs like a 10K or 5K or the Rebel Challenge or if you simply want to hang out with some Star Wars characters and cheer on your loved one, this weekend has something for everyone.

Not to mention you are also allowed to dress up for these marathons! It’s awesome to see the passion from these runners as they celebrate what they love in fun, creative ways.

Just make sure you don’t anger any Wookies…

If space isn’t your style, how about some superheroes or princesses?

So get out there and run like the Empire’s right behind you!

Star Wars Star Wars News
Related ItemsDisneyDisneylandEntertainmentGalleryMarathonStar WarsWalt Disney World
← Previous Story Excellent for a Ride and Keeps You Warm on Cold Nights
Next Story → Next Star Wars Trailer May Have Some Familiar Faces: We Give You Permission to Cry