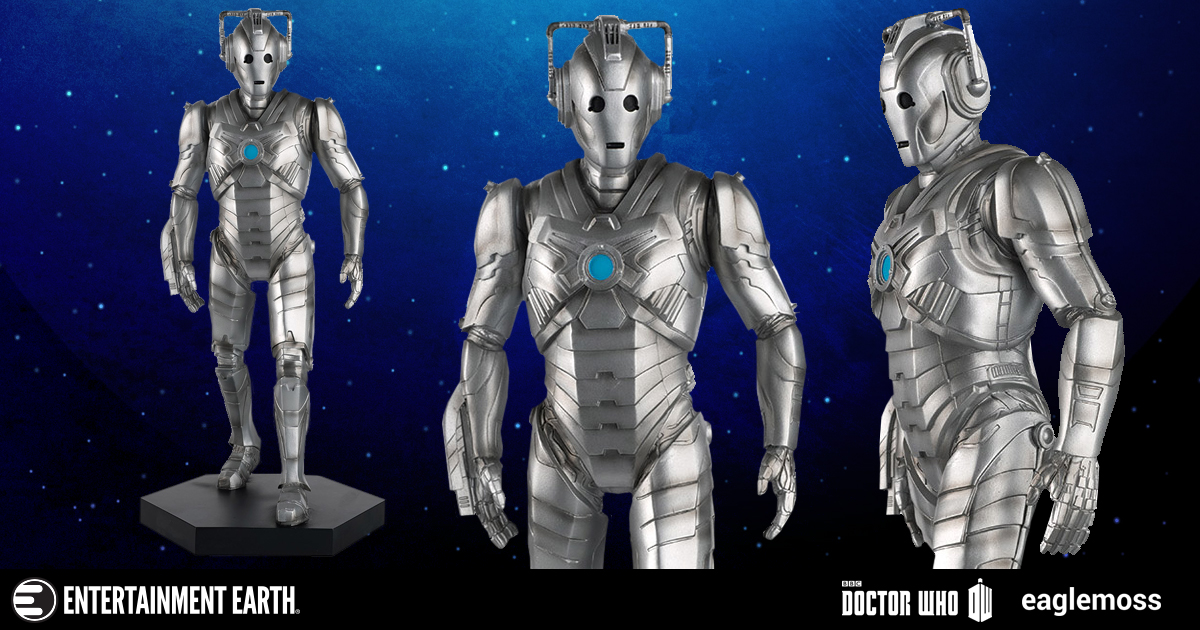 Did you know that the Borg from Star Trek: The Next Generation weren’t the first televised science fiction cybernetic hive-mind focused on forcing humans into computerized conformity? Over two decades earlier, on Doctor Who, the Cybermen were busily and unfeelingly “upgrading” their victims into a completely mechanized living death.

Created by the series’ unofficial science advisor, Dr. Kit Pedler, for the 1966’s milestone story “The Tenth Planet” – which was William Hartnell’s last regular appearance as the Doctor – the Cybermen were inspired by Pedler’s fear of “dehumanizing medicine.” He envisioned a worrisome day when people might gladly “sacrifice their entire bodies and their minds in the quest for immortality.” Out of this concern marched some of the Doctor’s most enduring archenemies.

Unlike many of the creatures who’ve caused Who viewers to cower behind their couches, the Cybermen’s design has seen multiple changes, small and large, over the decades. Now, Eaglemoss is adding the silver nemeses’ most recent iteration to their line of larger scale Doctor Who figures.

Standing 8-3/4 inches tall, this metallic resin figure presents the Cybermen as we saw them in the Neil Gaiman-penned “Nightmare in Silver” (2013), and again in the next year’s two-part finale, “Dark Water/Death in Heaven.” A little sleeker and a lot speedier than previous iterations, this version is distinguished chiefly by the glowing blue disc in the center of its chest armor (the emotion inhibitor, as we learned from poor Danny Pink’s experience). The figure comes packaged in a full-color box with a collector’s display stand and a 16-page magazine in a full-color box.

This year, the Cybermen will again, it appears, figure in a Doctor’s final outing. The original Cybermen, from Earth’s twin planet, Mondas, are slated to return for the last two regular episodes of Peter Capaldi’s tenure in the role. So, now’s the perfect time to pre-order Eaglemoss’ take on the sinister, soulless silver soldiers for your collection. Don’t wait too long, only to discover that supply has been “deleted!”