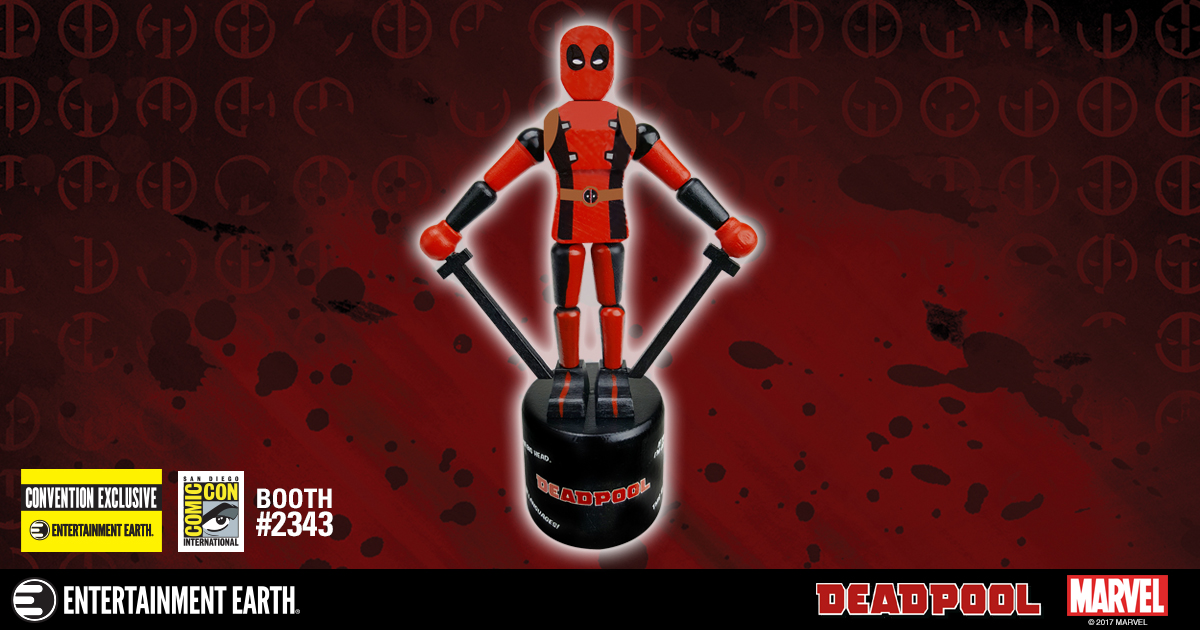 Deadpool is coming to San Diego Comic-Con, and he’s bringing his foul mouth.

Marvel has one of the most exciting rosters of characters in all popular culture. While avid readers know the characters inside and out, a wider audience is being exposed the innovative and imaginative characters all the time. Thus, much of the world was surprised last year when they were introduced to the irreverent and bombastic Deadpool.

Everything old is new again. Or, more accurately, everything new comes in an exciting, nostalgic style. Deadpool may be the new blockbuster movie character, but that doesn’t mean that you can’t enjoy him in classic retro style. With this Deadpool Wood Push Puppet – Convention Exclusive, which is a limited-edition variant of the popular original.

Crafted of solid wood, painted with vivid artwork and decals, this 5-inch scale puppet is entertaining on so many levels. Find the hidden button on the bottom of the stand and you loosen the bindings, making the wooden puppet go limp, tense, and dance as you see fit! This retro-style puppet mixes aesthetics almost as well as Deadpool himself does: it’s cute, yet it’s dangerous looking. This wisecracking anti-hero also comes with a variety of sassy sayings on his base.

Available for the first time at San Diego Comic-Con 2017, the Merc with a Mouth wooden push puppet has a limited production run of 492 pieces. Plus, as an Entertainment Earth Convention Exclusive, each limited-edition wooden push puppet is individually numbered with a holographic sticker. Ages 14 and up.

The first opportunity fans can grab this individually numbered and limited edition exclusive will be at San Diego Comic-Con on July 20, 2017, at the Entertainment Earth booth (#2343)!