You’ve heard the rags-to-riches story many times before, be it a girl who lost her glass slipper or a street urchin who had a fateful encounter with a genie.

But what about that story in real life?

Twenty years ago today, two brothers from Southern California, Aaron and Jason Labowitz, founded Entertainment Earth based on a simple principle: a love of collecting, toys, and sharing their passion with the world.

In 1995, they registered entertainmentearth.com on that wild new thing called the Internet.

With a strong business background and self-taught re: website creation, Aaron and Jason launched the website and put their first selection of the then “new” Kenner / Hasbro Star Wars action figures and vehicles up for sale on April 1, 1996.

The phones in their storage-room-turned-office rang off the hook. 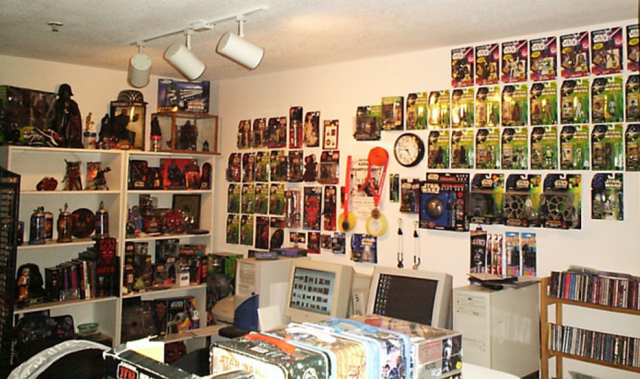 Since then, Entertainment Earth has grown and adapted to the ever-changing collector and Internet climates, adopting its Mint Condition Guarantee early on and overcoming obstacles as they came.

“We started this company as a one-stop source for the Star Wars action figure collector,” explains Jason, President and Co-Founder. “Over the years, our dear clients have led us to apply our deep knowledge of the collector market to cover all corners of the pop culture industry.”

The growing presence of Entertainment Earth can be seen at San Diego Comic-Con. First attending in 1997, the company boasted one of the first toy booths at the convention, and year after year has become more prominent and influential there.

From a garage and a simple website, with only three employees, to a massive warehouse and a constantly growing staff, Entertainment Earth has become one of the foremost and renowned distributors of toys and collectibles on the planet.

Today, anyone who’s a geek or a collector or who has a passion for something can turn to Entertainment Earth.

We’re excited about where the last 20 years have brought us and what the next 20 years and beyond hold for Entertainment Earth and our valued clients.