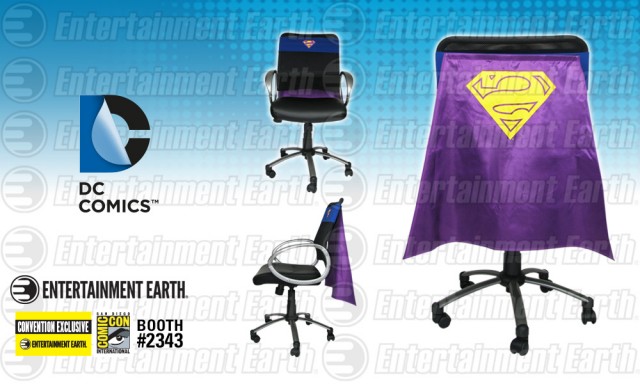 After introducing the world to the Batman Classic Chair Cape™, Entertainment Earth is about to change the way you sit once again with the Convention Exclusive Bizarro Chair Cape™!

With the help of the Man of Steel’s alter ego, Entertainment Earth is proving that sitting down in style isn’t just for heroes with the second release of their patent pending Chair Cape™ product line!

This ingenious new product line is not only a first for collectibles giant Entertainment Earth, but a first for the industry as well! No longer does sitting down have to be a mundane and dreary undertaking. At 24-inches long, this clever cape comes with a sturdy yet highly adjustable hook and loop based belt and strap that will fit most chairs.

To continue the inaugural launch of this exciting new product line, Entertainment Earth has partnered with Warner Bros. Consumer Products and DC Entertainment to turn your office upside down with the Bizarro Chair Cape™. Available for the first time on July 8, 2015 at the Entertainment Earth booth #2343 at San Diego Comic-Con, fans will have the chance to assume the identity of Superman’s doppelganger wherever they sit with this limited edition patent pending Chair Cape™! Limited to only 1,200 pieces, each box is individually numbered too!

Be it at the office, in your home, on the patio, a birthday party, a wedding, or even a comic-book convention, the patent pending Chair Cape™ by Entertainment Earth is ready to save the world one seat-back at a time.

Stay tuned to Entertainment Earth and all our social media networks for the latest SDCC reveal news and future Chair Cape™ releases!

About DC Entertainment
DC Entertainment, home to iconic brands DC Comics (Superman, Batman, Green Lantern, Wonder Woman, The Flash), Vertigo (Sandman, Fables) and MAD, is the creative division charged with strategically integrating its content across Warner Bros. Entertainment and Time Warner. DC Entertainment works in concert with many key Warner Bros. divisions to unleash its stories and characters across all media, including but not limited to film, television, consumer products, home entertainment and interactive games. Publishing thousands of comic books, graphic novels and magazines each year, DC Entertainment is the largest English-language publisher of comics in the world.

All related characters and elements are trademarks of and © DC Comics. (s15)