Be the Hero Your Office Deserves

Entertainment Earth is changing the rules of seat décor with their patent pending Chair Cape™! The Chair Cape™ line will ensure that sitting down will no longer have to be a mundane and dreary undertaking.

Fans will have the chance to assume the identity of Batman, Superman, and Bizarro, all in stock now, and can pre-order Wonder Woman and Batgirl. Made of high quality fabric materials, each Chair Cape™ measures about 24-inches long and comes with a sturdy yet highly adjustable hook and loop belt that will fit most chairs. 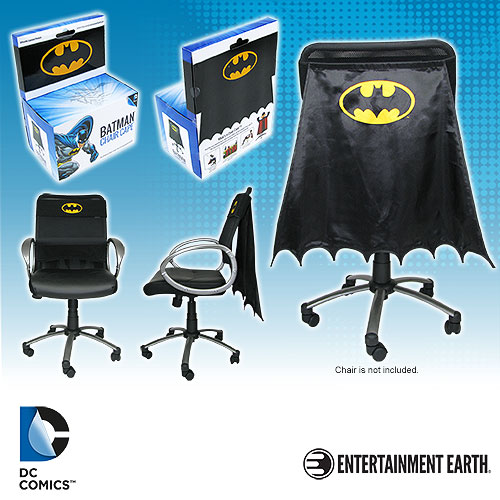 Be it at the office, in your home, on the patio, a birthday party, a wedding, or even a comic-book convention, the patent pending Chair Cape™ by Entertainment Earth is ready to save the world one seat-back at a time.

About DC Entertainment
DC Entertainment, home to iconic brands DC Comics (Superman, Batman, Green Lantern, Wonder Woman, The Flash), Vertigo (Sandman, Fables) and MAD, is the creative division charged with strategically integrating its content across Warner Bros. Entertainment and Time Warner. DC Entertainment works in concert with many key Warner Bros. divisions to unleash its stories and characters across all media, including but not limited to film, television, consumer products, home entertainment and interactive games. Publishing thousands of comic books, graphic novels and magazines each year, DC Entertainment is one of the largest English-language publishers of comics in the world.