X-Men: The Animated Series introduced a lot of new fans to the already amazing X-Men source material and gave us a chance to fall in love with a ragtag group of heroes trying to protect the very people who hate and fear them. Among the prolific roster of mutants was the curios, charming, card-wielding Cajun called Gambit! For those of us who became lifelong Gambit fans because of the show, you’ve finally been rewarded with a brand new Entertainment Earth Exclusive Limited Edition Gambit Glow-in-the-Dark Funko Pop! figure!

Announced at London Toy Fair, the new Pop! has mutant fans clamoring to get their hands on the Cajun. The design is based on the 90s classic look made popular by artist Jim Lee. Gambit is posed with his red eyes, and glowing cards charged and ready for action. This figure stands 3 3/4-inches tall. Funko also announced a Rogue figure, which pairs perfectly with this exclusive.

This new Pop! is a must-have for X-Men collectors, comic fans, and pretty much anyone who wants a figure of the best X-Man ever! Remy LeBeau (AKA Gambit) would be a welcome addition to any shelf, display, office space, or even mounted on your dashboard. Win over the hearts of all the ladies and some men, by adding the charismatic Gambit to your Funko Pop! collection now! 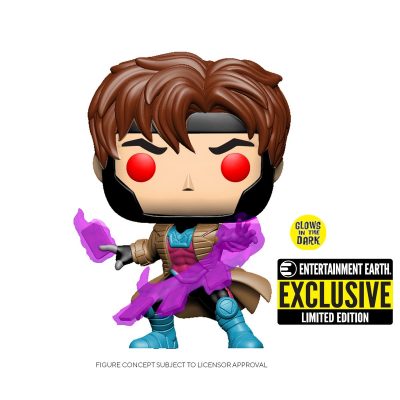