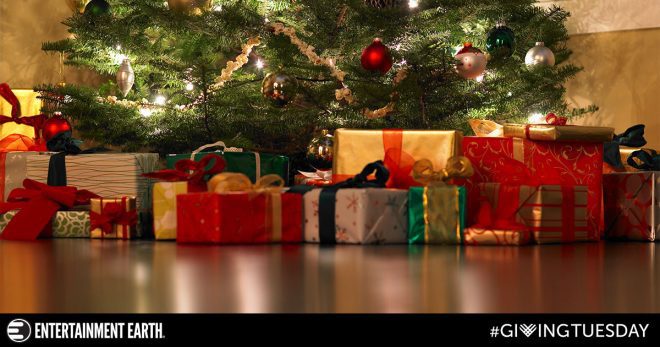 Philanthropy is an important part of Entertainment Earth. Since 1995 the company has partnered with a wide variety of charities, nonprofits, schools, and events to donate toys to the less fortunate. This year alone, Entertainment Earth donated 5,520 toys to organizations such as Kiwanis International, Rancho Obi-Wan, Screamfest, The Kessel Toy Run, Children’s Burn Foundation, and the Food Bank of Southern California.

But that’s not all. Entertainment Earth is excited to announce on Giving Tuesday that it will once again be a proud national corporate sponsor of the Marine Toys for Tots Program with a generous donation of over 4,000 toys, which will be distributed to children in communities nationwide.

“We are very pleased to welcome Entertainment Earth back for their fifth year as a major national corporate sponsor,” said retired Marine Colonel Ted Silvester, Vice President of the Marine Toys for Tots Foundation. “With their ongoing partnership, we will be able to bring joy to thousands of less fortunate children who otherwise might have been forgotten.”

During this season of charitable giving, a portion of each purchase from the Entertainment Earth website will support the company’s Toys for Tots donation. Individuals and organizations interested in joining Giving Tuesday on their own can make a monetary or toy donation to local programs.