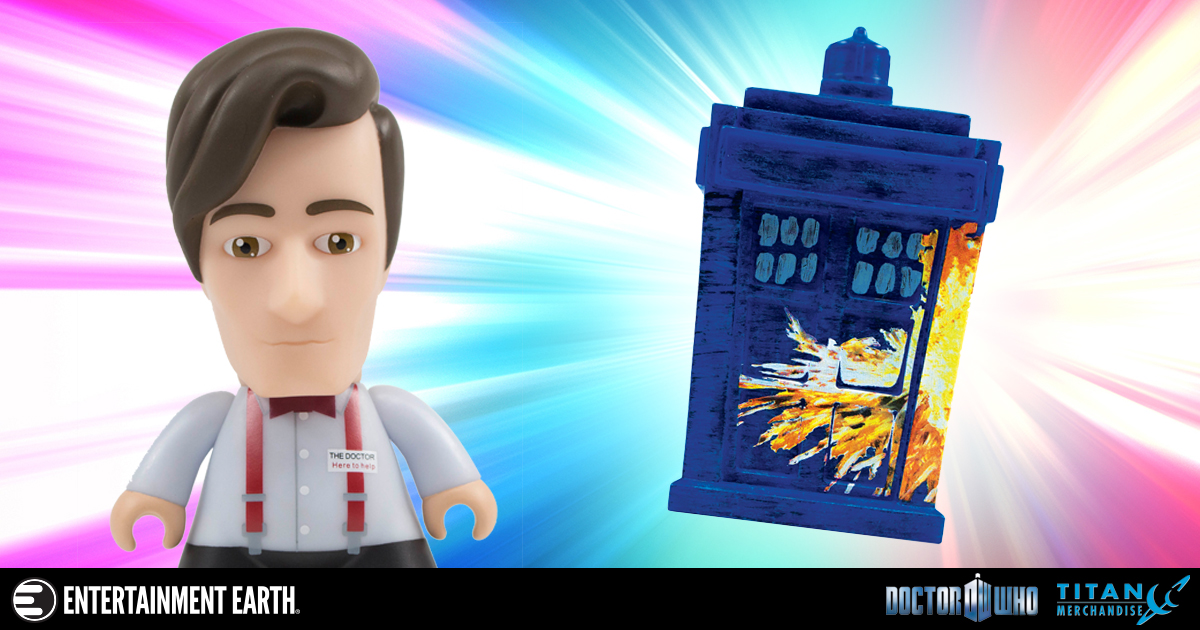 Doctor Who fans are bidding farewell to both Peter Capaldi, who ends his three-season tenure as the Time Lord in this year’s Christmas episode, and Steven Moffat, who’s been the series’ showrunner since 2010.

But before waving our last goodbyes – and before welcoming new showrunner Chris Chibnall as well as Jodie Whittaker, who’s already made Who history as the first woman cast as the Doctor – let’s remember the Eleventh Doctor, played by Matt Smith.

Bounding through space and time with seemingly bottomless reserves of energy and wit, Smith’s Doctor, the self-styled “madman with a box,” helped bring Britain’s most famous science fiction franchise a supernova-sized explosion of visibility and popularity on this side of the pond (no pun intended).

If Amy Pond’s “raggedy man” and Clara Oswald’s “clever boy” is “your Doctor,” and if you still think bow ties and fezzes are cool, then you won’t want to miss these fun, 4-1/2 inch vinyl collectibles from Titan – both convention exclusives!

The Doctor himself appears, in the endearingly out-of-proportion Titans style, as he did in season six’s “Closing Time.” In that story, he saved his friend and one-time flatmate Craig (played by James Corden) from becoming a Cyberman by urging Craig to focus on the cries of Craig’s newborn baby boy, Alfie (or, as the baby preferred to be addressed, “Lord Stormageddon”).

Gareth Roberts’ script showcased Smith’s gift for physical comedy and his and Corden’s comedic chemistry to full effect while delivering a sweet and sentimental finish affirming the power of love. (Some fans felt Doctor Who leaned too heavily on that moral during Steven Moffat’s years at the helm, but this blogger thinks we probably need to hear more about love’s power in the media these days, not less!)

Titan’s miniature vinyl TARDIS, meanwhile, presents the Doctor’s iconic time machine as Vincent Van Gogh painted it, an image glimpsed at the beginning of “The Pandorica Opens.” In that episode, the first half of the fifth season’s universe-shattering finale, the TARDIS became trapped in a single, terrifying moment of time, its endless explosion causing cracks throughout the time-space continuum – including the ones in Matt Smith’s very first and very last episodes (“The Eleventh Hour” and “The Time of the Doctor,” respectively).

Both collectibles come packaged in window display boxes and will make timeless additions to your desk or display shelf collections of Doctor Who memorabilia.

Just before the Eleventh Doctor regenerated into the Twelfth, he told Clara, “I will not forget one line of this, not one day… I will always remember when The Doctor was me.” If you will, too, then order your Titans 4-1/2 inch vinyl Eleventh Doctor figures today!

Collectibles Vinyl Figures
Related ItemsDoctor WhoTitan MerchandiseVinyl Figure
← Previous Story Don’t Blink. Don’t. Even. Blink. Or This Statue Will Be Gone!
Next Story → He Moves the Stars For No One – Do You Dare Take the Goblin King Home with You?