Experience the Evolution of WONDER WOMAN™ with her Invisible Jet Convention Exclusive!

A worldwide icon for over 75 years, WONDER WOMAN™ has captured our attention as a comic book staple, a prominent cartoon figure, a live-action television star, and this year she finally receives her very own live-action feature film. With each phase, WONDER WOMAN™ connects with fans of all shapes, sizes, ages, and genders – many holding dear the version of Diana that they first encountered. But this year, Bif Bang Pow! gives fans a limited-edition collectible that celebrates the many AMAZON PRINCESS™ looks we’ve come to love throughout the years with a WONDER WOMAN™ Evolution Pin Mate™ Wooden Figure Set with Invisible Jet – debuting at San Diego Comic-Con.

Help celebrate the incredible, groundbreaking years of this important and revolutionary character by being one of the lucky people who own this limited production of 1,200 figure sets – each uniquely numbered with the production run number on a holographic sticker. It is sure to be the envy of everyone you know, and did I mention it’s a limited edition? You need this set! 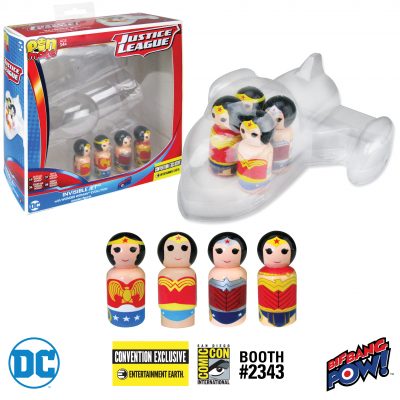 The first opportunity for fans to grab this limited-edition item will be at San Diego Comic-Con on July 20, 2017 in the Entertainment Earth booth (#2343)!