The Stackable Figures Taking Your Collection to New Heights

It’s official the Tiki trend re-emerged – and this time it’s brought a whole new wave of licensed merchandise, leaving fans straight up giddy! And now, lovers of all things Tiki can create their own custom totem poles with the new Tiki Tiki Totem™ wooden figures from Entertainment Earth.

Standing 3-inches tall, each Tiki Tiki Totem wooden figure features 360-degree artwork created by a blend of hand-painted details along with limited decal elements and includes interlocking sections (on the bottom and top of each figure) so you can create personalized Tiki Tiki Totem poles by mixing and matching the available characters!

Let’s take a moment and see who’s joining the Tiki Tiki Totem family for the holidays this year.

Star Trek: The Next Generation

It’s been 30 years since the officers aboard the USS Enterprise NCC-1701-D) took their first mission. And Captain Picard, La Forge, Data, and Worf are ready to keep exploring unknown territories (safely from your shelf) as Tiki Tiki Totem wooden figures.

How will the Asgardian god of thunder stack up against foe Hela? Well, you can decide – with these four new Tiki Tiki Totem wooden pieces showcase Thor, Hulk, Valkyrie, and Hela. And while all the new Tiki Tiki Totems look amazing, the amount of detail on these 2017 film inspired figures have us extra pumped to see the movie! 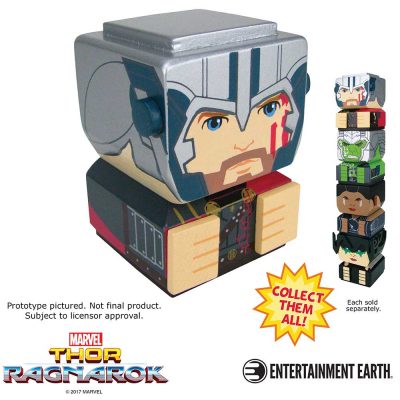 Head over to entertainmentearth.com today to check out the complete line of Tiki Tiki Totem wooden figures (including The Guardians of the Galaxy, classic Avengers, Star Trek: The Original Series, and more.

Collectibles Exclusives Fun Collectibles Superheroes
Related ItemsDCDC ComicsJustice LeagueMarvelStar TrekStar Trek: The Next GenerationThor: RagnarokTiki Tiki Totem
← Previous Story He’s a Jedi, Like His Father before Him
Next Story → To Be the Man, You Gotta Dress Like the Man!