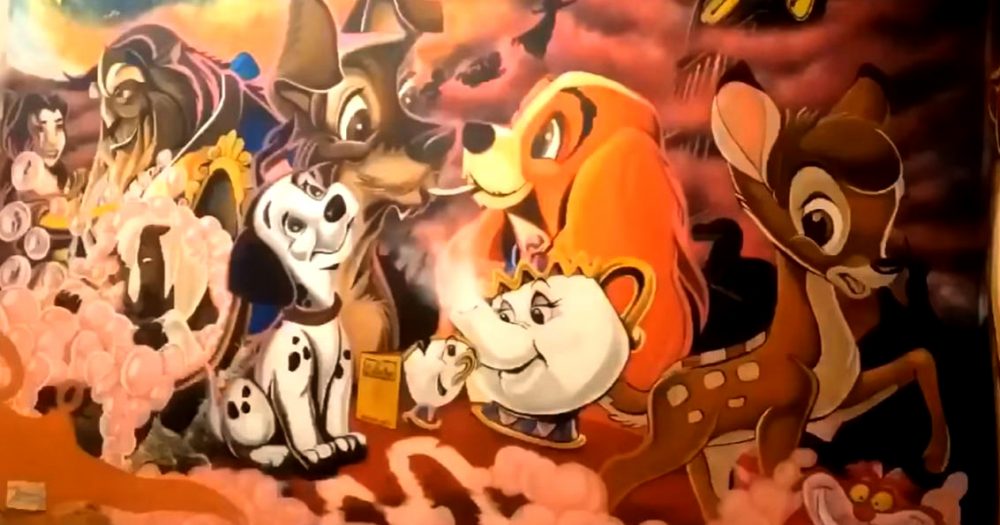 You’re not likely to see artwork this magical outside of a Disney movie. Adam Hargreaves’s daughter, Bobbie, found her bedroom too boring to sleep in. In probably the biggest overreaction a father has ever made, Adam put his artistic skills to the test to turn her bedroom into nothing less than an expansion of Disneyland. Bringing to life characters such as Simba, Peter Pan, and Stitch, the transformation of her bedroom is absolutely stunning.

Take a look at the time lapse video that Hargreaves posted to YouTube.

On the far end, we see London take form as Peter Pan and the runaways from the Darling’s nursery fly overhead. Under the clouds, we see Lady, Tramp, Bambi, and other characters take shape. The London fog stretches onto the next wall where Mufasa’s mane takes shape, turning the scene into a mural of stunning proportions. From The Lion King to Aladdin to The Little Mermaid to Jungle Book and beyond, well over a dozen classic characters are represented.

It takes more than a great artist to create a work like this, it takes a great dad. The kind of dedication and sincerity that Hargreaves gives to this unpaid project shows him to be a loving father and great role model for other dads.