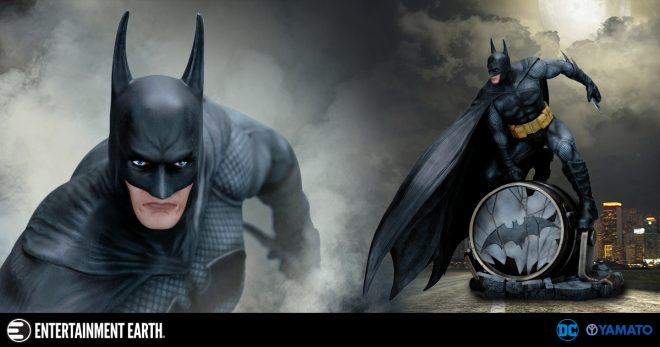 Batman is perched on a broken Bat-Signal with his cape flowing as if he just landed. Whoever broke it must not be too far away because he has a very determined facial expression with his Batarang ready in his left hand. The detailing on his suit has been sculpted in a way to show off really intricate texturing. He’s also painted in a way to show how he can blend into his surroundings of the deep blue and blacks. The only thing to stand out is a vibrant yellow utility belt.

A close of Batman’s face is rather impressive. He has really piercing eyes, a sculpted furrowed brow on his cowl and an almost clenched jaw. The ears on his cowl stand thin and tall. It is a much more traditional Batman that almost reminds me of the Michael Keaton version from the ’80s.

As impressive as Batman is, it is the broken Bat-Signal that really ties this statue together. The front looks like broken glass with a few pieces missing. There are great stains painted in to show its extensive use. Even one of the legs holding the signal up seems to be have been crippled. This really brings a backstory to this statue that makes me wonder which villain would dare mess with this symbol.

Overall this is a very impressive detailed statue. It is a 1:6 scale standing about 14 1/2-inches tall from the base to the tip of Batman’s pointy ears. Each one of these Fantasy Figure Gallery Batman statue does come with its own art card, a numbered edition plaque and a certificate of authenticity. Don’t wait to pre-order this statue as I’m sure it will be a well sought after piece like almost all of Royo’s previous statues.

Collectibles Statues
Related ItemsBatmanDCLuis RoyoStatueYamato USA
← Previous Story Spider-Man, Spider-Man, Does Whatever an Interactive App-Enabled Super Hero Can
Next Story → The Most Memorable Scene from Basic Instinct Is Preserved in This Statue