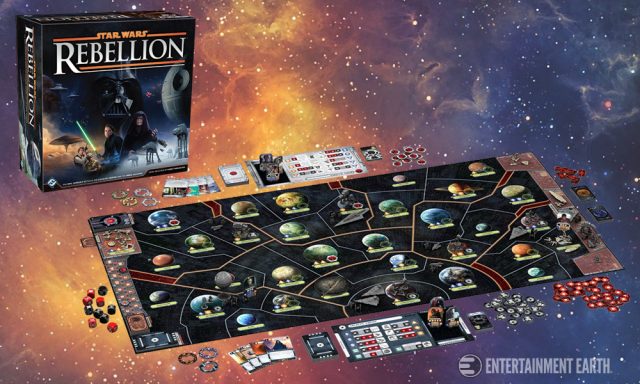 It is a period of civil war, and you must take control of the rebel struggle against the oppressive hand of Emperor Palpatine! The Star Wars Rebellion Strategy Board Game presents you with a highly detailed Star Wars experience and is quite simply the most terrific Star Wars board game ever to come to production.

This is a game with endless possibilities. This is a game that doesn’t have to follow the Star Wars storyline. Tarkin doesn’t have to die in the Death Star. Leia might not be saved this time around. Mon Mothma can lead the rebels to victory or be humiliated in a ground war that she foolishly creates on the outer rim. Vader can kidnap rebel leaders, or rebel leaders can wipe out the Super Star Destroyer with the infamous Sith Lord on board early in the game.

The fleet that you control and the decisions that you make give you an authentic feeling of inclusion in the Star Wars universe. Troops move when you say so, and the fleet responds to your every order.

Playing this board game, with one to three friends, becomes an intensely unique and personal Star Wars experience. Less scripted than even the most open-ended Star Wars video games, this might be the best way to experience Star Wars yet.

Each side has their own strengths and weaknesses. But it is the leaders who make the decisions that will either exploit a hole in the Imperial defenses or expose a hole in your own. This game is sure to be a new favorite pass time of Star Wars fans everywhere. Pre-order yours with free shipping today at Entertainment Earth!