My Favorite Ladies of Gotham in 10 Sensational Statues

For me, the women of Gotham are far more interesting than their male counterparts. Where you often find brooding male protagonists, the ladies are frequently playful, mysterious, and fierce. Gotham’s women are beautiful, enticing, and dangerous. Whether hero or villain, angry or kind, these characters represent many different facets of what it means to be a woman in Gotham.

To celebrate some of my favorite Gotham ladies, I’m counting down my 10 favorite statues featuring these powerful women. Heroes and villains alike make the list, and all of them with a strong sense of self and an equally strong feminine prowess. So, without further ado, here are my personal favorite ladies of Gotham in 10 sensational statues.

My Favorite Ladies of Gotham in 10 Sensational Statues

Luis Royo’s rendition of Catwoman is sexy beyond belief, especially as this statue from Yamato USA. The Fantasy Figure Gallery DC Comics Collection Catwoman Statue features a scintillating Selina Kyle with whip in hand. Her whole outfit is textured like leather and the facial sculpt is feminine and fierce. This limited edition statue is perfect for fans of the feline fatale.

I love Poison Ivy. I love her red hair, environmentalism, friendship with Harley, everything. Ivy doesn’t put up with anyone’s shenanigans yet she’s capable of ensnaring nearly anyone in her schemes. The Cover Girls Poison Ivy Statue shows a softer side of Ivy with a rose in hand. Her bright red hair contrasts against pale skin and textured green clothes. But be careful, she’s a tricky one who is literally able to kill with a kiss.

Kotobukiya’s Batgirl Bishoujo Statue showcases Barbara Gordon in a classic costume – blue-purple and all. She perches atop a gargoyle base with her hair and cape flowing in the breeze. I think this statue is beautiful. From the bright colors to the dynamic pose, I can see this statue in Gotham, moving through the night sky with red hair whipping behind her.

Who doesn’t love the DC Bombshells? The 1950s pin-up style transforms Poison Ivy into a seductive boudoir model. Simply put, the Bombshells Poison Ivy Statue is alluring. With her trusty Venus flytrap minions caressing her back, Poison Ivy is both beautiful and dangerous. This design wears lingerie and features vine tattoos on her arms and back. I love this statue because the sculpt is intricately designed and the Venus flytrap details are delicate and somewhat mystical.

My time in Gotham really started with Batman: The Animated Series and that’s where Harleen Quinzel was born. The Black and White Harley Quinn 2nd Edition Statue immortalizes her classic design in black and white. She wears her sleek harlequin suit in two-tone and blows the smoke from her pop gun. While Harley’s design is ever-changing, the original animated look is my favorite.

Kate Kane is stunning in her Gotham Knights uniform as the DC Bombshells Batwoman Statue. She carries a baseball bat across her shoulders and sports bat ears as a visor. Batwoman is not among my favorites in terms of character, but this statue? Yes, please! The Bombshells design is wonderful and the details applied to this statue solidify its place on this list.

Luis Royo’s designs come to life again as the Fantasy Figure Gallery DC Comics Collection Harley Quinn Statue – EE Exclusive. This exclusive version features Harley with her trusty mallet resting on her right shoulder and a paint deco inspired by her design in Batman: Arkham City. Between the sculpt preview and the colored art, I know that this version of Harley will be a hit. And if she’s not, well, that’s what the mallet is for.

Who doesn’t love Julie Newmar as Catwoman? She set the stage for every Catwoman to follow with her glittering full-body black ensemble as a mastermind burglar. The 1966 TV Series Catwoman Maquette Diorama perfectly evinces the purrrrfect likeness of Newmar from the 1966 television show. The sultry thief leans against a faux-bronze cat statue and admires her latest prize: a sizable diamond.

Like I said earlier, the animated series Harley Quinn is nearest and dearest to my heart. When the Cover Girls Harley Quinn Statue was announced, I declared my love from the rooftops! This was the Harley statue I was waiting for. From her original design to the pop gun to the playful manner with which she stands on her mallet, my heart was sold. There are other Harley designs and sculpts, but none of them are above this one for me. 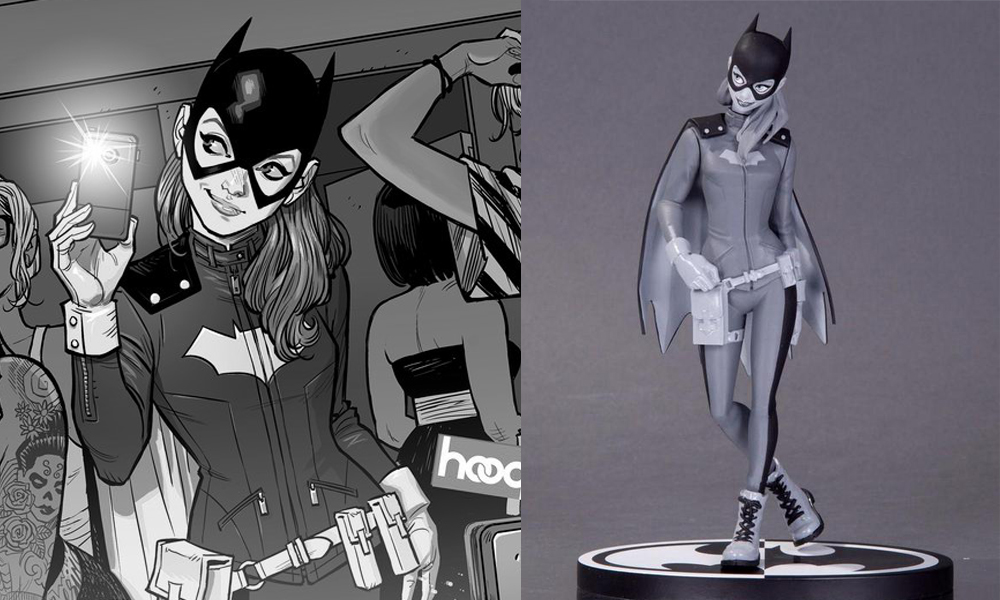 Okay, so let’s talk about the Black and White Batgirl by Babs Tarr Statue because it has the place of honor on my list. I adore Babs Tarr’s practical redesign for Batgirl in The New 52. Between the removable cape, the leather jacket, and the Doc Martens, she can take anything on. I’ve been waiting for a Batgirl statue that I truly love and this is it – this is the one for me.